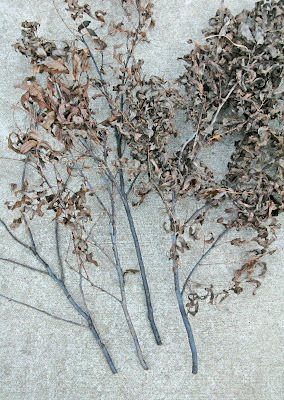 This afternoon I decided to trim up some seedling pecan trees growing along the south edge of my farm. These trees are growing in the worst soil on my farm, an eroded Dennis silt loam that is shallow and very prone to drought. However, I can't bear to cut down  these squirrel-planted pecan trees even if I'll never harvest a nut. I can still enjoy the shade.
When I drove up to the trees I noticed the ground was littered with small branches that look like they had been cut from the tree with the leaves still attached. I picked up four of the fallen shoots and brought them back to the house to photograph (photo at right). 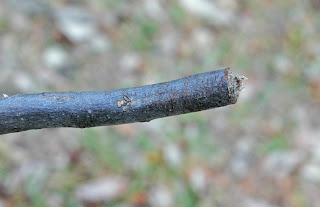 If you look closely at the cut end of the branch you will note that the outer portion of the stem was cut smoothly but the center portion actually broke off in a gust of wind (photo at left). This type of limb pruning is caused by a long-horned beetle called a "twig girdler". You can see a photo of this beetle in a previous post. 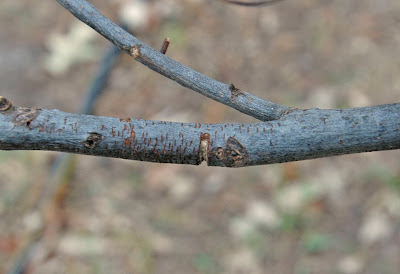 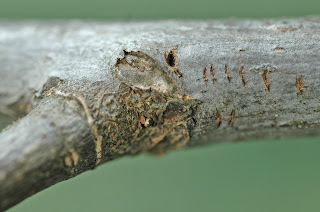 Looking even closer at the twigs, I noticed a oviposition site at the base of old leaf scar (photo at left) . Twig girdlers carve a crescent shaped hole in the twig and deposit their eggs inside. Looking at the entire stem I found several oviposition sites, always placed just below a leaf scar.
Twig girdlers adults are active in late summer (August-Sept.). They girdle pecan stems at this time of year so that all the carbohydrates created by the leaves can not be translocated down to the roots and end up accumulating in the stem above the girdle. Eggs laid in crescent-shaped scars hatch the following spring, with the resulting larvae feeding on the nutrient rich twigs.
In commercial orchards, twig girdler is rarely a problem because sprays aimed at controlling pecan weevil during the month of August also control twig girdler. For non-sprayed pecan trees, twig girdler populations can reduced by picking up all fallen twigs during the winter months and burning them (thus killing the next generation of girdlers).
Posted by William Reid at 9:25 PM