Many northern pecan growers have experienced a drier and hotter summer than normal in 2018. The downside of this weather pattern is that I find it hard to work outside in the heat of the afternoon, that is, unless I'm sitting in an air-conditioned tractor cab. The plus side is that we have seen a lot less pecan scab this summer. The other day, I searched my farm for signs of scab and found none. Although you should remember that I applied two fungicide cover sprays to my pecan trees back in June.
So, I drove down to the old Pecan Experiment Field to see if I could find any scab. I started my search with two of the most scab-susceptible cultivars in our area--Peruque and Hirschi.  The Pecan Field was sprayed only once this year (shortly before I retired) so my chances for finding scab were much better.

I found scab lesions on both Peruque (photo above) and Hirschi (photo at left). Over the past three to four years, I was finding it almost impossible to produce these two cultivars without crop loss from scab. With just the few scab lesions present on these nuts this summer, Peruque and Hirschi should develop full-sized pecans and split their shucks normally. The hot, dry weather (especially in June) has sure helped slow the spread of scab this summer.

To remind you how bad scab can get on Peruque, I've reprinted a photo I took in 2015 (photo above). This scab infested nut was smaller than normal and produced far less kernel.
Posted by William Reid at 5:00 PM

Checking on the pecan crop

It is finally getting to that time of year when pecans have grown large enough to easily judge the nut crop held by our trees. Currently the 2018 crop does not look very impressive. Yes, we'll produce some nuts this fall but for most cultivars, the crop looks below average. Today, I photographed several pecan cultivars just to give you some idea how this year's pecans are developing (photos at right and below).

After taking the photos, I collected a couple of nuts from each cultivar so that I could cut them open and check on kernel development. After a late start this Spring, I was expecting that all the heat we've experienced during the past six weeks would have helped the trees catch up in terms of kernel development. As it turns out, I was wrong. Here we are, nearing the end of July and the kernels have barely achieved 1/4 kernel expansion (see photos below). During most growing seasons, early ripening cultivars like Gardner and Faith will achieve full water stage by the first week of August. That doesn't look like it will happen this year. 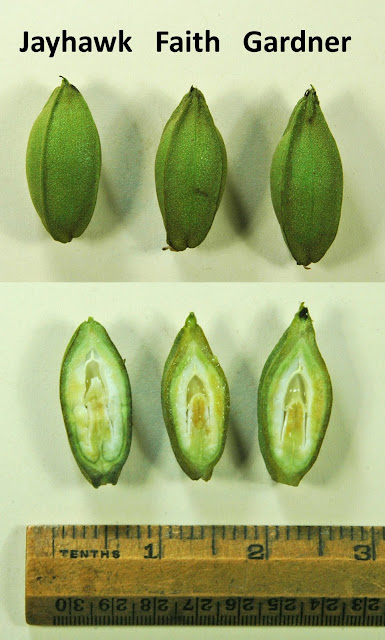 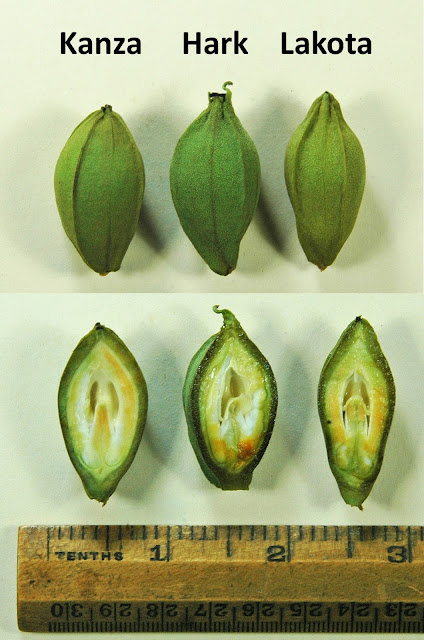 Too many shoots growing from a scion 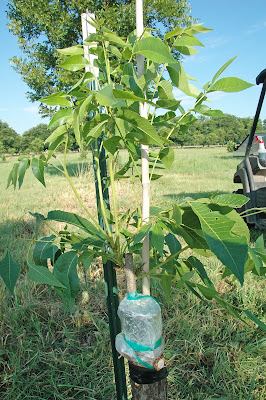 I've been working my way through my orchard trimming grafts, when I came to a bark graft with a profusion of new shoots (photo at right). At first I thought it would take just a couple of snips with the pruning shears to train the scion to a single stem but upon closer inspection pruning this tree turned out to be a little more complex. 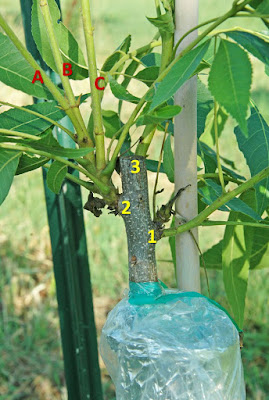 A close-up photo (at left) reveals that 3 buds broke and began growth from the scion. These are labeled 1,2 and 3. The bud labeled #2 produced a shoot that quickly formed stalked buds. These stalked bud have since sprouted and formed the shoots labeled A, B, and C. My job was to choose the best shoot to become the central leader and remove all others. 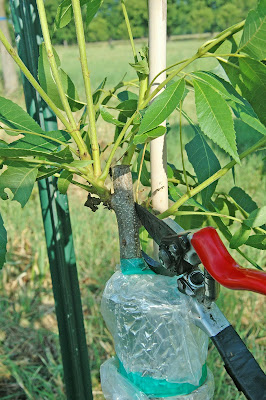 I started by removing the primary and secondary shoots at bud #1 (photo at right). I cut off both shoots with a single cut. 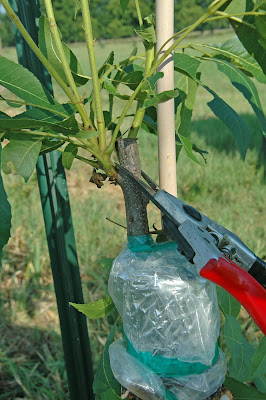 Next, I removed the top of the scion just above bud #2 which also removed the shoot growing from bud #3. Note that I made this cut at an angle to facilitate rapid healing  of the pruning wound (photo at left). 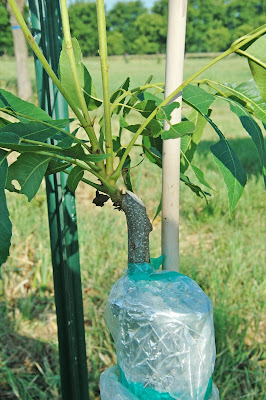 At this point, I'm down to a single shoot from the original scion (photo at right) but unfortunately this shoot has already grown 3 shoots from stalked buds. Looks like I need to keep pruning. 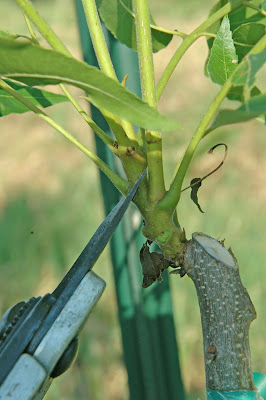 I chose to keep the shoot on the right in the photo. This was the strongest of the three shoots and enabled me to make one pruning cut to remove the other shoots (photo at left). Again, I made an angled cut. 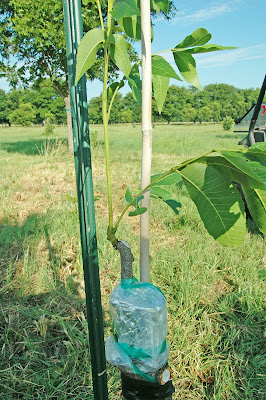 After all my pruning, I was left with a skinny single shoot (photo at right). However, with all other competing shoots removed, the tree will quickly focus all its energy into growing and strengthening this shoot into a central leader. 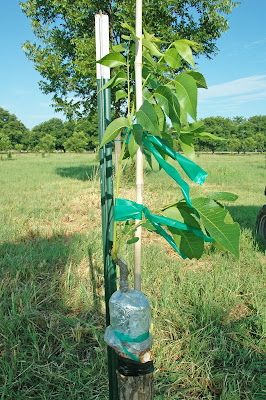 To prevent wind damage to the remaining spindly shoot I made sure to tie it to my training stink in two places using green flagging tape (photo at left). I also cut off the grafting tape used to seal the plastic bag around the scion. Judging from the size of the stock tree, I'm expecting this scion to grow 5-7 feet in height and over one inch in diameter by summer's end.
Posted by William Reid at 2:00 PM 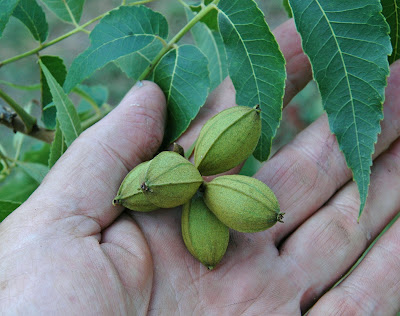 After a recent thunderstorm, I noticed a wind-damaged branch dangling from one of my Kanza trees. Unfortunately, that limb had several nut clusters that will never see harvest (I pruned off the limb). However, I used this opportunity to check on the development of the small nuts (photo above). 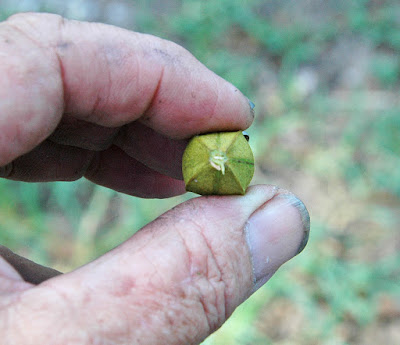 During the month of July, pecan nuts grow rapidly achieving their full size by early August.You can check on kernel development by pulling a nut off the tree and slicing it in half. During the period on rapid nut sizing, I hold the nut so I can see the attachment scar at the bottom of the nut (photo above, left). The attachment scar is oval in shape with a prominent white bar of woody tissue that runs along the long axis of the oval.  I order to see both sides of kernel expansion, I cut the nut open perpendicular to the long axis of the oval-shaped attachment scar. 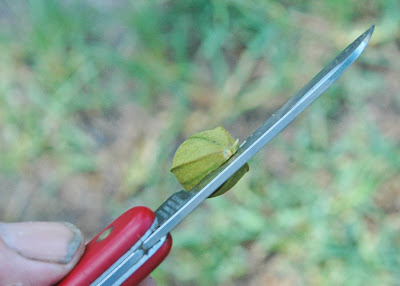 When the nut is still small, work carefully with your pocket knife to splice the pecan right down the middle, from base to apex (photo at right). 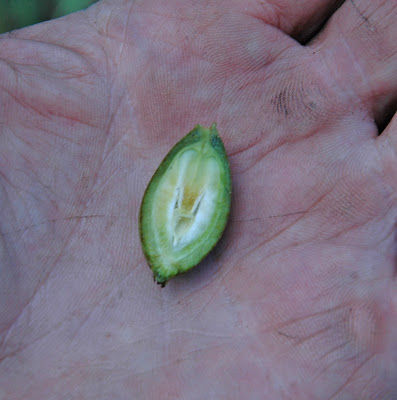 The photo at left shows the Kanza nut I cut open today. Inside, I found a small heart-shaped ovule which will eventually grow into two kernel halves. This small structure is filled with liquid endosperm. The pecan embryo can be seen as the white tip at the base of the ovule.
The small-heart stage of kernel development is the first sign a pecan is entering a period of rapid fruit expansion. Hopefully we'll get enough rain this month to help pump up the size of the nuts. 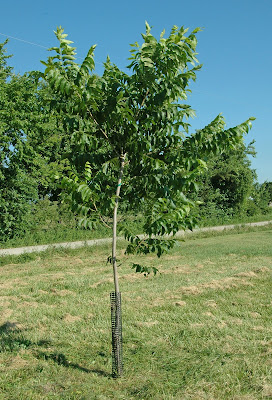 With the weather unbearably hot this summer, my trips to the pecan orchard seem to be confined to the early morning hours. The other day, I noted a young Kanza tree that appeared top heavy and bending over toward the north (photo at right). In Kansas, a strong south wind blows most summer days causing almost all young trees to develop an obvious lean to the north. However, this tree was too top heavy, had no strong central leader and lacked lower lateral branches. This tree needed some attention and summer pruning is the best way to get this tree back in shape. 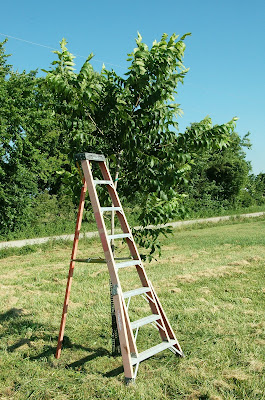 This tree was too tall for me to prune from the ground so I grabbed my eight foot tall orchard ladder (photo at left). With the ladder in the photo, you can see that the tree is roughly 12 to 13 feet in height. 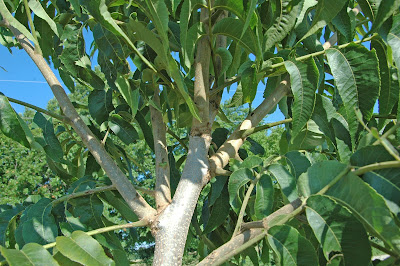 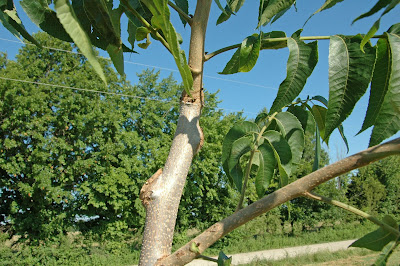 I chose to keep the most upright growing shoot and pruned off the others. I kept the lateral shoot at the bottom of the photo because had a nice wide branch angle. 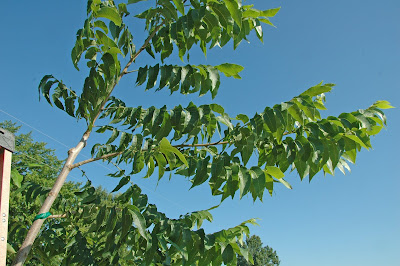 The lateral branch I decided to keep near the top of the tree was nearly 4 feet in length (photo at right). To slow the growth of this lateral limb and to stimulate the growth of additional lateral branches along lower portions of the central leader, this limb needed pruning. 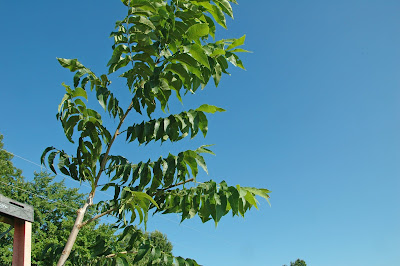 I used the 2-foot rule and cut the lateral back to 2 feet in length. In making the cut, I always prune just above a downward facing bud. This will help direct any re-growth outwards rather that upwards to compete with the central leader. 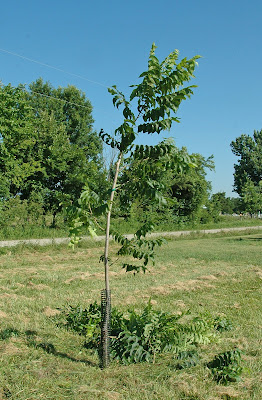 I finished pruning this tree by cutting all new lateral shoots to two feet in length (photo at left). The pruning of lateral shoots stimulates bud break along the trunk and will serve to fill out the central portion of this tree's canopy. The tree is still leaning to the north but it is no longer top heavy and prone to wind breakage.
Posted by William Reid at 10:51 PM