Preparing a pecan sample for evaluation 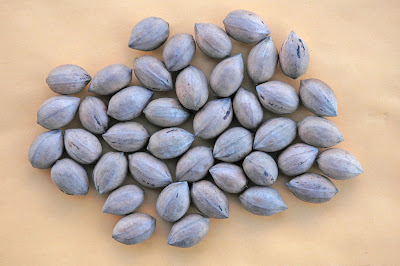 Each year, the Kansas Nut Growers Association evaluates nut samples, submitted by producers, for shell-out percentage and kernel quality. The results of these evaluations are exhibited at our annual meeting in March with the results published in the Kansas Nut Growers newsletter. We are currently right in the middle of pecan harvest so it is a good time to think about collecting your samples the evaluation.
When I collect samples for evaluation I start by pulling a random sample of a singe cultivar out of a sack of cleaned nuts. The photo above shows a sample I pulled from our Kanza crop. They are all Kanza nuts but they still vary in size and shape. 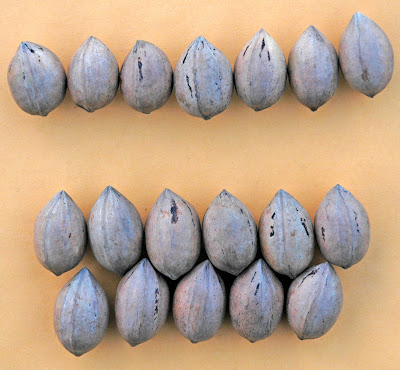 In the photo at left, I sorted through my random sample and pulled out the small, squaty, miss-shaped, or shell fractured nuts (nuts in the top row). This left me with a more uniform, and more representative sample of the Kanza nuts produced on our farm (bottom two rows).
For evaluation purposes, we require a 30 sample. Place your sample in a paper bag that is marked with your name and the name of the cultivar. Samples should be sent to: Pecan Experiment Field, 8960 SW 90th Str., Chetopa, KS 67336. We are also interested in evaluating outstanding nuts produced by seedling trees.
Posted by William Reid at 9:24 PM 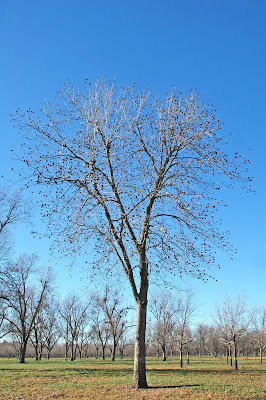 Back in 1965 the USDA pecan breeding station set some scions of the pecan clone 55-11-11 to Kansas for advanced testing. Pictured at right is the tree grafted with that wood. In 1996, 55-11-11 was named Kanza and released as a new, scab-resistant pecan cultivar for northern pecan growers.
One of the greatest challenges facing pecan breeders is predicting how a new cultivar will perform over the long run. And by long run, I mean 30 years and more. History is full of pecan cultivar that looked great as young trees only to fall apart in a mature orchard. Shoshoni, Chickasaw, Mohawk, and Maramec are a few examples that come to mind.
So every year I watch this old original Kanza tree for signs of weakness. So far, this single Kanza tree has been extremely reliable, producing nuts every year with no sign of production problems. This year's crop was no different (photo above) and provides more evidence that Kanza is a cultivar for the long run.
Posted by William Reid at 4:31 PM

Email ThisBlogThis!Share to TwitterShare to FacebookShare to Pinterest
Labels: kanza

Importance of a vigorous rootstock 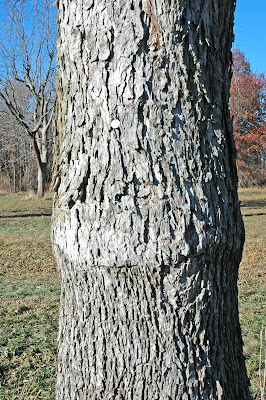 We were harvesting pecans today and couldn't help but notice the graft unions of two of our older trees. As I clamped the shaker onto the trunks,  I asked myself, "What happens when the scion cultivar out grows its rootstock?"
In the photo at right, a Major scion was grafted about 4 feet up into a native pecan tree. Note the slight bulge at the graft union and the fact that the  Major top has a larger diameter than the native rootstock. This tree was originally grafted way back in the late 1950's and is currently about 2 feet in diameter. This is also the only Major tree on the research station that has out grown its rootstock.
Major trees tend to grow more vigorously that other northern pecan cultivars. Major trees that we grafted on to Giles seedling rootstock back in 1983 are nearly the same size as the Major tree pictured here. It became obvious to me, that the Major tree in the photo, was being dwarfed by a inferior rootstock.
I shook the tree and found its nut production to be similar to other Major trees of equal trunk size. The problem is, at 55 years old, this Major should be closer to 30 inches in diameter.  As far as I can tell, the inferior rootstock has had only one effect on the scion cultivar--it has slowed tree growth. However, slower tree growth means the tree is slower to come into bearing age and has less cumulative nut production over time. 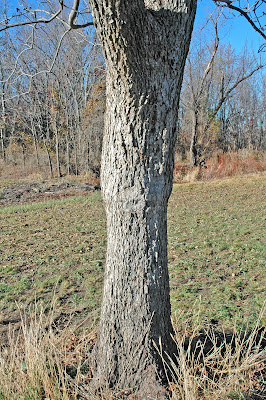 The Major tree is not the only tree that has shown scion over growth. In the photo at left, a Peruque scion was grafted into a native tree also sometime in the late 1950's. This tree is even smaller in diameter than the Major tree pictured above. If you take a close look at the photo of the Major tree, you can see the Peruque tree just to the left of the Major trunk in the background. Since these two trees are only 100 yards apart, it is likely that the seed parent for both inferior native rootstock trees could be the same.
On my farm, I have hundreds of volunteer pecan seedlings that could be grafted. But which ones should I use? Will I be condemning certain scions to a life of perpetual slow growth if I choose the wrong seedling? How can I tell?
I only graft seedlings that have demonstrated a strong growth rate--2 feet of new growth in a single year. If a tree seems to be struggling to grow as a sapling, it is a pretty sure sign that tree will not provide a vigorous enough rootstock for any scion cultivar. 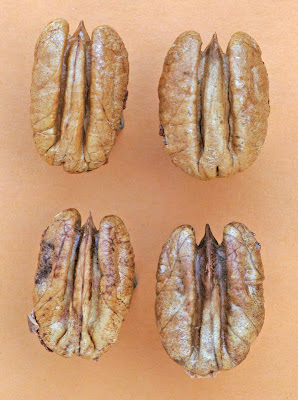 I was cracking some Pawnee pecans and noticed that this past summer's drought didn't effect nut fill as much as it created  kernel color defects. In the photo at right the upper two kernel halves are plump and exhibit normal kernel color for Pawnee. The lower two kernel halves have dark blotches and prominent veins. Look carefully at the lower two kernels and you will see that they are also not as plump as the upper kernels. The area between the dorsal groves looks shrunken and the meats are not fully expanded all the way to the tip of the kernel.
You can find both types of kernels produced by the same tree. Without enough available water this past summer,  the tree was unable to completely fill out the kernels of all nuts produced.
I've tasted both normal and darkened kernels and found little difference in flavor. However, the dark blotches can be a big "turn-off" to consumers. If  Pawnee had just produced some kernels with less than perfect kernel fill and no color changes, no one would probably notice. Blotchy kernel darkening associated with incomplete nut fill seems to be unique to this year's Pawnee crop.
Posted by William Reid at 10:34 AM 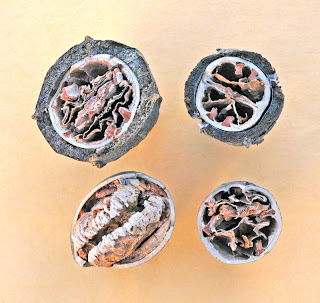 After harvesting for a couple of weeks we have finally started to clean some of the 2012 pecan crop. Today, I walked over to the piles of rejected nuts that came out of the cleaning plant and grabbed two handfuls of stick-tights. The first handful came from the pile that was blown out of the cleaner by the air leg (photo at right). As you can see, the cleaner blew out stick-tights that had wafer-like kernels and nuts that fell out of the shuck normally but had shriveled or no kernel. These are the type of pecans we definitely want to keep out of our final product. 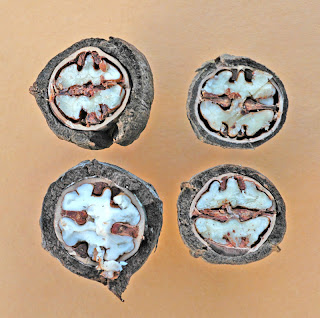 I took a second sample from the the rejects that had been pulled off the inspection table by hand. These were all stick-tights but unfortunately, these nuts contained edible kernel (photo at left). The summer-long drought we experienced in 2012 has caused the shucks of some nuts not to open properly. This type of incomplete ripening seems more prevalent on trees with heavy crop loads. It's a terrible shame to waste these perfectly good kernels but if the shucks stay firmly attached the nut, the nut is  unmarketable.  Fortunately, stick-tights with good kernel inside are far fewer in number than the numerous stick-tights we are seeing being blown out of the cleaner (nuts with little or no kernel).
Posted by William Reid at 10:20 PM 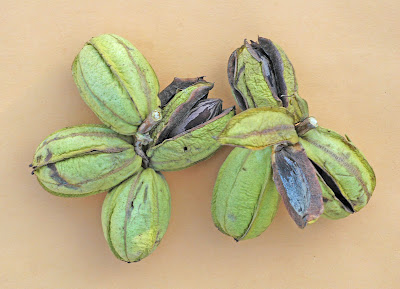 Today we switched from harvesting pecan cultivars to picking some of our natives.  While shaking the trees I noticed about %5 of the trees had nuts with green shucks. I climbed out of the tractor and collected some of the green hulled pecans (photo at right). I noted that some of the nuts had split their shucks normally while others were not split at all. 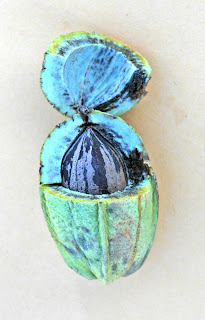 Taking my knife, I cut into the shuck of a pecan that had not opened properly and popped off the shuck (photo at left). The pecan inside was fully colored and loose in the shuck but the shuck had not split along the four suture lines. This called for futher investigation. 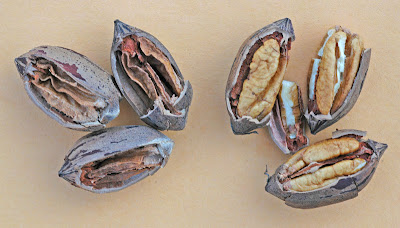 I collected 3 pecans that had normal shucksplit and compared them to 3 pecans that I had to cut out of the shuck. I then cracked open each of the nuts to reveal the kernel inside (photo above, right). The 3 pecans on the right had shucks that opened normally. The pecans with shriveled kernels on the left were cut out from closed shucks.
During a drought, some heavily bearing trees "choose" to fill only a portion of their crop. Those pecans that do not fill their kernels do not shuck-split properly. We saw the same phenomenon when we harvested our "Posey" crop. 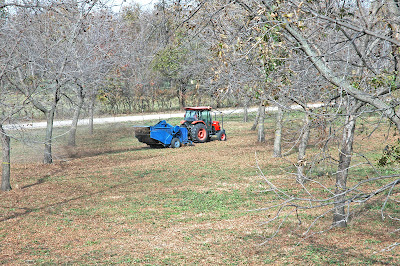 A few days ago I was out in a hydraulic lift making nut counts and couldn't resist talking a photo of pecan harvest from a bird's-eye view (photo above). From 25 feet up into the canopy of our trees,  the harvester looks so small.
Posted by William Reid at 4:32 PM

Email ThisBlogThis!Share to TwitterShare to FacebookShare to Pinterest
Labels: harvest 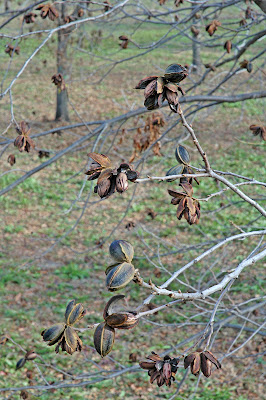 Thirty years ago, Giles was one of the most popular cultivars to propagate in Kansas. Selected from a native grove outside of Chetopa, Giles seemed like the perfect pecan for our growing under our conditions. But grow any cultivar long enough and you'll discover you still haven't found the perfect pecan cultivar.
Giles has a tendency to over-produce. This leads to all the typical problems associated with alternate bearing including poor kernel quality during "on" years and next to zero crop during "off" years.  However, this year we've seen a new problem with our Giles trees--incomplete ripening.  A quick survey of Giles nuts still hanging from the tree reveals that some nuts have split shuck normally while others have not opened at all (photo above, right). At this point in the season, the nuts have have failed to split, will never open.
I peeled out some of the "stick-tight" nuts  and cracked open the shells to see if poor kernel development was the reason for lack of proper ripening (like we saw with Posey). In every case, the kernel in the sticktight nuts were just as well filled out as nuts that ripened properly.  Something else was causing sticktights. 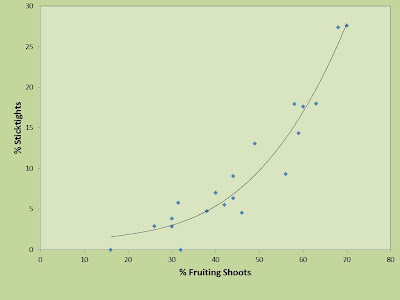