Pecan Harvest 2022: Making the best of a bad situation 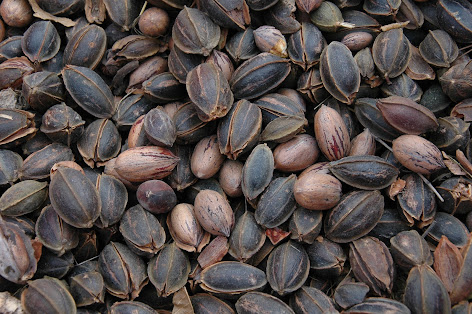 Following an extended summer drought and an early Fall freeze, the outlook for my 2022 pecan harvest season looked bleak. Staring up into the canopies of my trees all I could see were small black stick-tights. Should I just walk away from the whole mess or should I attempt to salvage what I could of the 2022 crop? I decided to shake the trees and see if I could recover at least a few edible nuts.

The photo above shows the nuts I collected from a row of Gardner trees using my pecan harvest equipment. Most were sticktights and would have no commercial value. Surprisingly, I discovered a sprinkling of good pecans among those collected.   Once I ran the harvested nuts through my pecan cleaner, I ended up with about 5% saleable pecans. I definitely won't be covering my production costs via pecan sales this year. 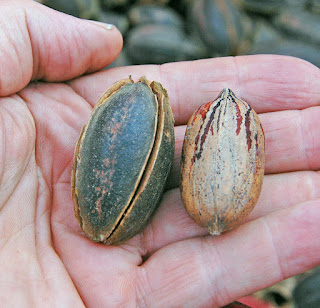 Before the freeze, many Gardner nuts were showing signs of shuck-split. However, this past summer's drought prevented normal shuck dehiscence. The photo at right shows two Gardner nuts harvested this year. The sticktight appeared to have split along normal suture lines but the shuck is still firmly held in place. 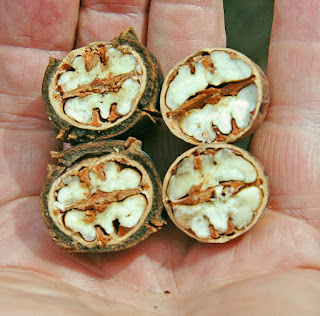 To discover a possible explanation for why one the Gardner nut released normally from the shuck while the other did not, I decided to cut the nuts open to check on kernel development (photo at left). Although both nuts had developed kernels inside the shell, the pecan with attached shucks did not produce the plump kernels associated with a normal Gardner nut. Full kernel development inside the shell is an important stimulant for shuck opening.

Remember this year's fall freeze occurred on October 19th, three weeks after the normal shuck split date for Gardner. This year, all of my trees were suffering from intense water shortage. The drought delayed and even inhibited normal shuck opening. The deep freeze only stopped an already damaged crop-ripening process.

It has been over a week since a strong arctic air mass descended across the central plains and ended the 2022 growing season. I recorded 19 degrees F (-7 C) at dawn and knew immediately that pecan leaves and shucks would be killed.  Pecan leaves were freeze dried  on the tree and hung on for about a week before dropping to the ground. The freeze had little impact on the pecans that had already split their shucks. However, as I mentioned in earlier posts, the extended drought we have suffered this year inhibited normal nut ripening.

Fortunately, most of my Kanza nuts had split their shucks before the freeze and have opened up normally (photo at right). Young Kanza trees (< 6" DBH) suffered more from the drought and have produced much smaller nuts that did not open (100% stick-tights).

Some cultivars appear to have opened partially after the freeze. The Thayer nuts pictured at left have full kernels and I hope the pecan harvester will beat the nuts hard enough to remove most of the shucks. During normal rainfall years, Thayer ripens 6 days before Kanza and should have opened well before the freeze. Unfortunately, it looks like my Thayer trees didn't get enough water to ripen normally.    Hark is a cultivar that usually ripens at the same time as Kanza. Not this year. The photo at right illustrates the current state of my Hark crop. Very few of these nuts will break out of their shucks, leaving me to harvest a bin load of stick-tights. 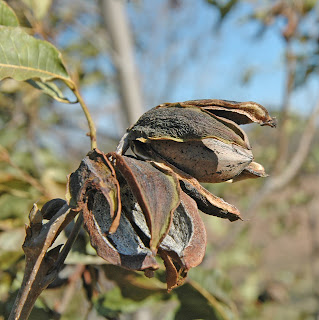 Caney was one cultivar that split open before the freeze and will fall free from the shuck at harvest (photo at left). But since this was one of the very few trees that opened up early, Caney became a prime target for crows to devour. The nut cluster pictured at left had three nuts but only one remains. A hungry crow knocked two nuts out of their shucks and onto the ground. Flying down to the dropped nuts, the crow then used its beak to crack open the nuts and consume all the kernels. 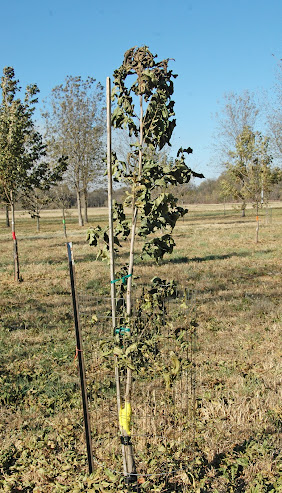 An early Fall freeze can damage the cambium of current season grafts. So while I was out inspecting my nut crop, I stopped at a vigorously growing scion to check for damage. The tree pictured at right was grafted this past Spring using a bark graft. The scion had grown over five feet in height (fantastic for a drought year). Unfortunately, this tree was not prepared for such a quick drop in temperatures. The freeze killed all the foliage but the most serious cold damage can only be revealed by inspecting the cambium on the scion shoot. 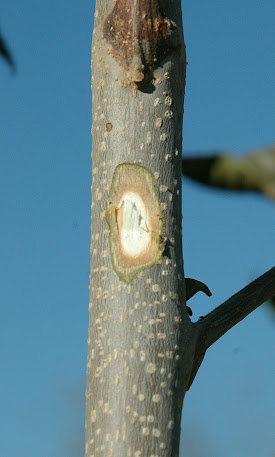 Using my knife, I peeled back the bark to expose the inner bark and cambium. The inner bark of healthy twigs should be green in color. This tree had significant internal browning which indicates cold injury.

I'll need to watch this tree carefully next Spring for signs of bud break. This tree will most likely suffer die-back or I could loose the entire scion. From past experience, I've noticed that a freeze damaged grafts usually re-sprout from below the graft union. If that happens, I'll need to train a trunk sprout to a central leader then re-graft the tree in the Spring of 2024.

Erratic shuck-split during this drought year

Our local weatherman is predicting a strong cold front to drop temperatures into the low 20's by tomorrow morning. Once that happens, the 2022 pecan growing season will come to an abrupt end. Pecan leaves will freeze and drop from the tree. Nuts that have not shuck-split at this point will be frozen in the shuck to cause what is commonly called "stick-tights".

Because this massive cold wave has been predicted for some time now, I made sure to scout my pecan grove for shuck-split last weekend. All of the photos presented in this post where taken on  Saturday, Oct. 15th. All of the cultivars pictured normally ripen ripen much earlier, in late September or very early October. This year's extended and deep drought has changed everything.

I was very pleased to see Kanza split (photo at left) on most of my trees. However, I noted that most of the younger Kanza trees (< 6 inches DBH) were still tight in the shuck. It is likely that the younger trees had more difficultly in competing with the ground cover for water. And without adequate water, the shucks can't open.

Since Kanza represents about one half of my total production, it looks like I'll have some nuts to sell this Fall even if they are much smaller than normal (drought decreased nut size).

Unfortunately, some cultivars are were not even close to opening their shucks. Gardner (photo at right) usually ripens at the same time as Pawnee in Late September. This year Gardner nuts are smaller than normal and have adequate kernel fill. The shuck has separated from the shell but it has not split open. It will be interesting to see if the freeze will pop Gardner shucks open. If not, I'll be amassing a huge pile of stick-tights  for the burn pile.
This year, several cultivars are demonstrating a wide variation in shuck development within a single nut cluster. The cluster of Thayer pictured at left illustrates this observation. Note that the largest nut in the cluster is split while the three smaller nuts are still tight in the shuck. After tomorrow's deep freeze, will I have just a single saleable nut to harvest from this cluster. By next Saturday, when I scout the orchard again, I'll get a better idea of crop losses due to this early hard freeze.

The 2022 growing season in SE Kansas has proven to be one for the record books, and not in a good way. I keep thinking back to 2007 when we suffered a trio of weather disasters. First we had a late spring freeze that killed emerging shoots followed by the second highest river flood on record in July. The third shoe dropped when our trees were covered by a limb-breaking ice storm in December. Now in 2022, after drought and early fall freeze, I keep thinking, "What's next".  Fortunately, pecan trees are resilient and will bounce back to produce great crops in future years. 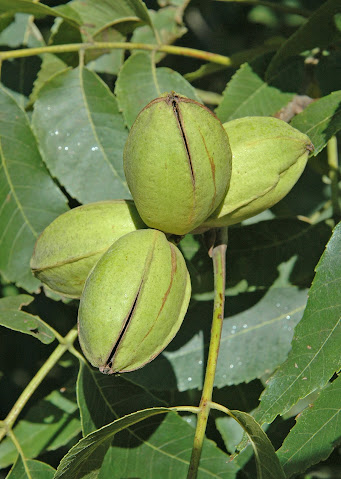 During the first week of October, I usually note several pecan cultivars that have split shuck. However, this year, the extended drought has delayed the normal timing of nut ripening. The photo at right shows a cluster of Earlton nuts with the first signs of shucksplit on October 3rd, 2022. 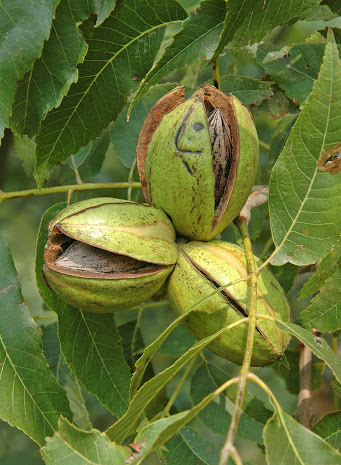 Earlton is a cultivar I released from my pecan breeding program primarily for its early ripening date. During a more normal rainfall year, Earlton ripens in mid-September. The photo at left was taken on 18 Sept. 2020 and shows a cluster of Earlton nuts as they normally appear at shucksplit.

Besides splitshuck two weeks later than normal, this year's Earlton nuts appear barely split open. This is a good reminder that adequate water supply is necessary for normal shuck opening. 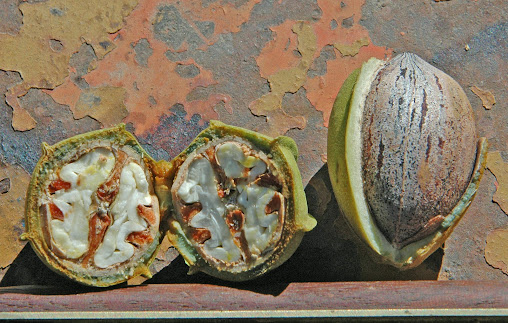 Liberty, another of my pecan cultivars, usually ripens around September 24th at my location. However, the drought has also delayed normal shucksplit for Liberty. The photo above shows a Liberty nut in cross section and a whole nut that I cut off a portion of the shuck to reveal the shell. This photo illustrates several impacts of the 2022 drought. First, these Liberty nuts are less that 1/2 the size of normal Liberty pecans. Although there is a good amount of kernel inside the nut, I noted that kernel fill was less than ideal. There are voids within the kernel halves and the central kernel partion is not fully compressed. These observations lead me to predict drier and less oily kernels at harvest. When this photo was taken on Oct. 3rd,  the shucks were not split open. When I cut off a portion of the shuck, I revealed a fully colored shell underneath. This tells me that the nut is fully mature but the tree lacks sufficient water to pop the shucks open on schedule.