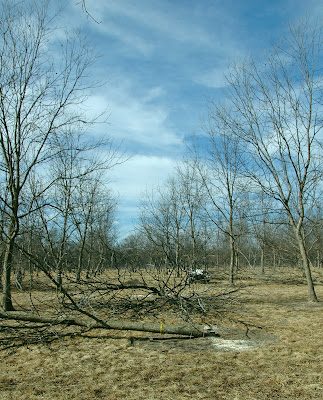 Over the course of the last 6 years, I've documented how we have progressively thinned a 3-acre block of Kanza trees (photo at right). In 2012, I drew up a tree thinning plan and have removed trees only within areas of the orchard with tree crowding. Year after year the trees continued to grow. As adjacent branches started to touch, we cut more trees. You can review the history of our thinning plan and the progress we made removing trees over the past 6 year by checking out the links listed below.
1. 2012, 2013, and 2014 tree thinning
2. 2015 tree thinning
3. 2016 tree thinning
4. 2017 tree thinning 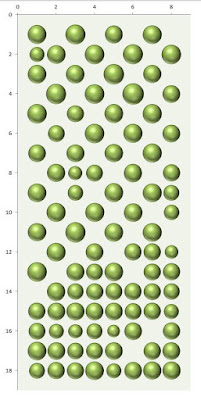 Following the 2017 pecan harvest, we measured the diameter of each tree's trunk and plotted that data on the map pictured at left. Each tree in the orchard is designated by a green circle with the size of that circle directly proportional to the diameter of the trunk. As you can see from the map, the bulk of the trees that still need removing are located at the south end of the field. You will also note that the largest trees in this orchard are located in the northeast corner. If you review the history of our progressive thinning plan, you'll find that we started the thinning process in the NE corner of the orchard back in 2012. 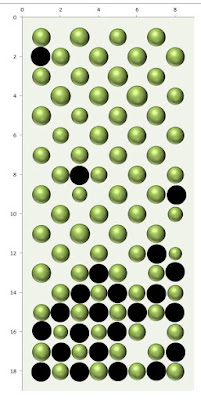 This year we completed the thinning plan by removing 23 tree from the orchard. The black dots on the map at left shows the location of the trees removed this winter.
When this orchard was established from stratified seed in 1996, we set trees 30 feet apart in a square pattern. In 2000, we grafted all 144 trees to Kanza. Now that we have completed our thinning plan, we have 72 trees remaining spaced 42.4 feet apart. The trees are still arranged in a square pattern but the squares are now tilted 45 degrees from the original north-south orientation.
It won't be too many more years until this orchard will need another thinning plan as the remaining trees continue to grow at the rate of 1/2 inch in trunk diameter per year. The next thinning plan will remove every other north-south row to carve out an orchard with trees 60 feet apart. 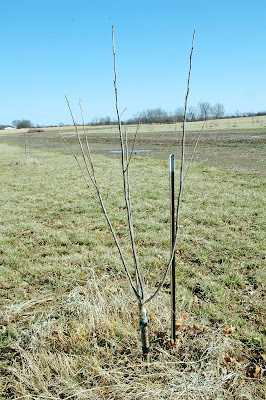 Finally, the sun came out and it was a great day to get outside.  I hopped into my UTV and drove down to the pecan grove to check on some of last year's bark grafts. The photo a right shows a Kanza graft that grew exceptionally well. The scion produced three strong shoots with the central leader growing over five feet in length in a single growing season. 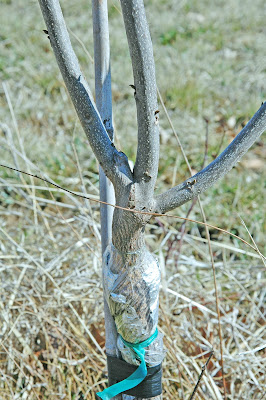 However, taking a closer look at the scion, just above the graft union, reveals that I've already got a tree with a narrow fork and a side limb that's growing way too close to the ground. So I grabbed my pruning shears and made a couple of much needed cuts. 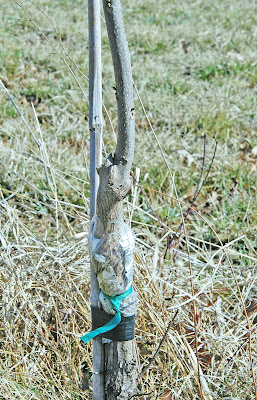 First, I removed the left side of the narrow fork. Then I pruned off the side limb growing out to the right (photo at right). This left me with a single central leader and a good shoot to develop into my main tree trunk.  After pruning, I moved down to the graft union and removed the plastic bag and aluminum foil from the tree. 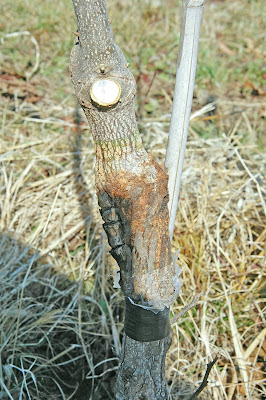 At this point, I used some cheap latex paint to apply a sun block over the entire graft union (photo at right). I used white paint to mark the tree as being grafted to Kanza. By painting the graft unions, I can quickly see which trees are grafted and which cultivar is grafted on the tree. On my farm, white=Kanza, yellow=Lakota, green=Hark, etc.  It takes a little extra time and money to color code trees but its definitely worth it to help me keep tract of my grafting efforts. It easy to get lost in my pecan orchard because it is based on grafting volunteer seedlings that have popped up at random across the field. No nice straight rows to keep things in order. 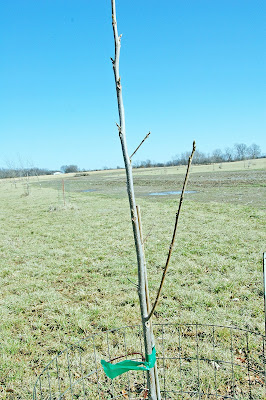 Once I replaced the deer cage over the tree, I noticed that the top of central leader had several small branches that had developed from stalked buds (photo at left).  All of these shoots would develop into narrow-angled branched with deep bark inclusions. So to prevent future problems with limb breakage, I pruned off each small shoot and any remaining stalked buds. 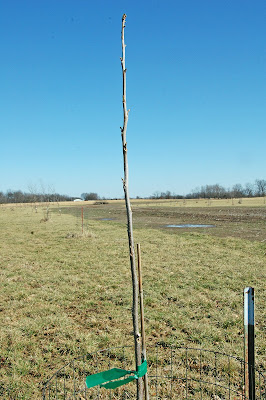 After pruning the central leader, I was left with a single strong shoot (photo at right). When this tree starts to bud out this Spring, I'll need to return with my clippers to perform some directive pruning to help maintain good structure. Side shoots will  emerge this coming season and my new Kanza graft will start looking like a pecan tree.
Posted by William Reid at 5:06 PM

On cold winter days, its always fun to pour over cultivar trial data. Below, I created a table of nut performance data for 43 pecan cultivars growing at the Pecan Experiment Field. For each cultivar, the table shows the number of years nuts were evaluated (N), the weight of a nut (average, maximum, and minimum), and the percent kernel (average, maximum, and minimum).
The time period of this data set (2004-2017) represents some of the most extreme weather conditions our trees have survived. We've seen record floods (2007) and record drought (2012). We suffered a limb-breaking ice storm (2007) and late spring frosts (2007, 2014). It no wonder that over the course of 14 years we've recorded some wide swings in cultivar performance. 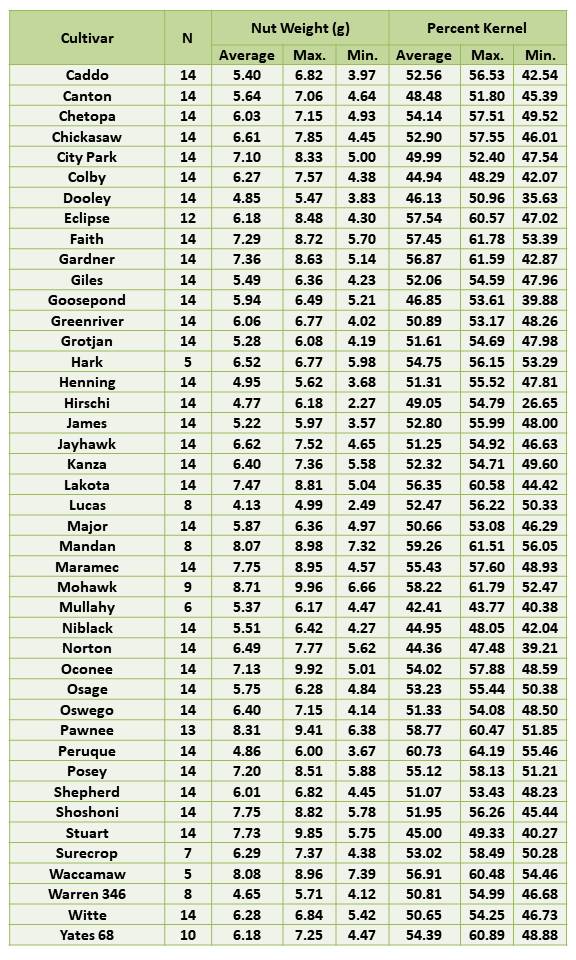 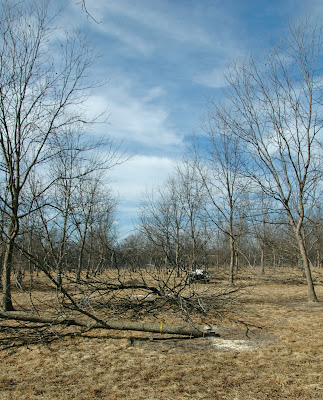 Today, we started cutting down trees in our block of Kanza trees to complete our orchard thinning plan (photo at right). Because Kanza is such a popular cultivar for northern pecan growers, we took advantage of having trees on the ground to cut scions from the long shoots that are usually found only at the very tops of the canopy. 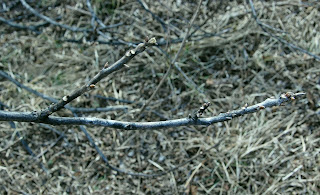 After setting down the chainsaw, I walked over to the tree's canopy in search of great scionwood. Most of the shoots on the lower portion of the tree's canopy had limited one-year-old growth (photo at left). These 6 to 8 inch long shoots might be great for setting a crop of nuts but they are too small to make good scions. 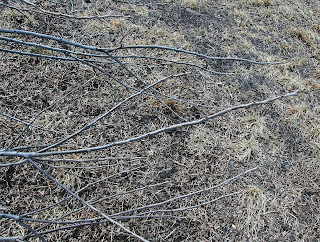 The one-year-old shoots at the very top of the tree were 2 to 3 feet in length, had plenty of buds, and were 1/2 to 5/8 inch in diameter (photo at right). These shoots make great scions. 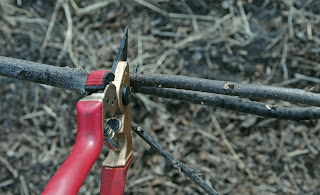 The photo at left shows you where I cut the one-year-old shoot from the tree.  To the right of the clippers, note the large prominent buds on last year's wood. To the left of the clippers, the two-year-old wood has lost all its primary buds and making it a poor choice for scionwood. 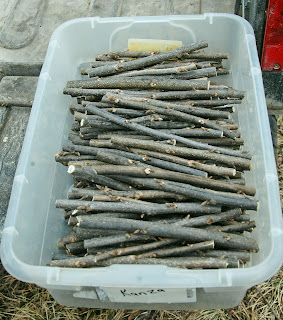 We cut our scions 7 to 8 inch long and place them in a plastic container (photo at right). Before adding scions to the box, we place a bed of paper towels at the bottom of the container. Once the box is full of scions, we cover the wood with several more sheets of paper towel. Before storing the wood in a cooler, we pour  cup of water over the paper towels to add moisture to the container. The paper towels above and below the scions absorb the water, then act as a wick to keep the air inside the box at 100% relative humidity.  Coupled with storage at 36 degrees F, the plastic boxes and wet paper towels will keep the scion fresh until grafting time.

A few years ago, I grafted several seedling trees with scions collected from our pecan breeding project. This past fall, those young grafted trees had their first crop of nuts which gave me the opportunity to compare the nuts they produced to nuts produced by the mother tree. 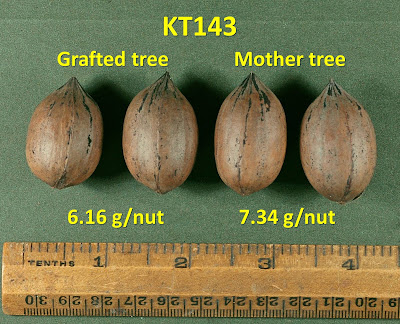 When I made the grafts, I actually top-worked trees that were roughly three inches in diameter.  By starting with such large stock trees, it is not surprising that these grafts set a crop in their third year.  In comparison, the mother trees are 21-years-old and are 10 to 12 inches in diameter. 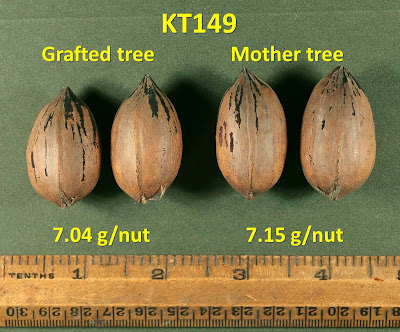 I was able to look at 3 clones from the breeding project. KT143 and KT149 are crosses of Pawnee and Major. KT334 is a hybrid of Pawnee and Greenriver. All three clones have been consistent producers of early ripening pecans. 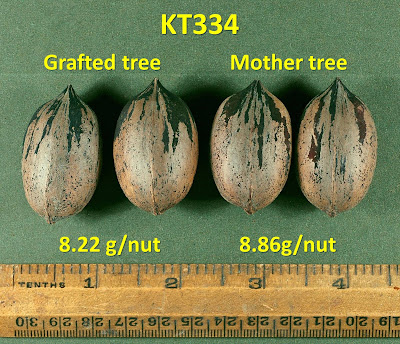 It is interesting to note that all young grafts produced smaller nuts than their mother trees. I've seen this phenomenon numerous times over the years. In testing new pecan cultivars, you just don't see the full potential (warts and all) of a pecan cultivar until the tree has grown to at least 10 inches in diameter. 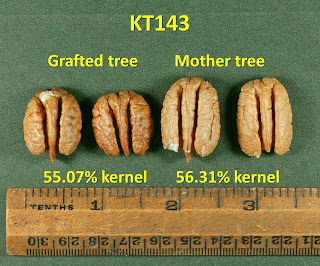 I also cracked a sample of nuts from each young graft and their corresponding mother tree to check for differences other than size.  With KT143, the kernels from the young graft looked very different than kernels from its corresponding mother tree. Kernels from the grafted tree were shorter, almost round in shape, and darker in color. These differences in kernel appearance can be attributed to a young tree's struggle to compete with the ground cover for water and nutrients. 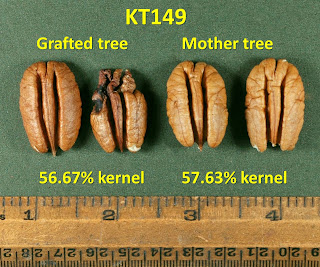 The KT149 kernels, like the inshell nuts, were very close in size to kernels extracted from nuts borne by the mother tree. The lower percent kernel I found from young tree nuts were probably due to kernel defects caused by stinkbug feeding. In managing my orchard, I only apply a full spray program to trees with a full harvestable crop. Since they weren't bearing enough of a crop to justify harvesting, the young KT149 trees did not receive the sprays needed to control stink bug. 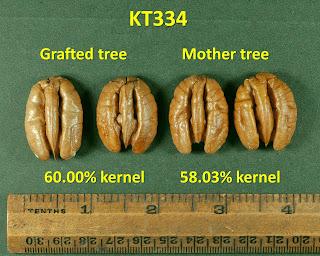 When comparing kernels from young KT334 trees to kernels from the mother tree, the nut meats look identical. Surprisingly, the numbers indicate that the young trees actually produced nuts with higher percent kernel. This might be a sign that KT334 can fill kernels completely under various growing conditions or an indication that the tree never sets enough nuts to cause kernel filling problems (inherit low yields). I need to take a closer look next year.
I wanted to share these pictures from our pecan breeding work to give you some idea why it takes slow long to develop new pecan cultivars. Weighing and cracking nut samples are among the easiest measurements to record but it takes many growing seasons to learn how cultivars hold up under widely varying weather conditions.  In addition, things like alternate bearing, disease resistance and susceptibility to cold injury usually aren't revealed until the trees are at least 25 years old. If I have learned anything from working with new pecan cultivars for the last 37 years it is that patience and caution are needed to avoid costly cultivar mistakes.
Posted by William Reid at 4:41 PM