The 2017 growing season started off with ample rainfall and ideal conditions for the spread of pecan scab (photo at right). In response, we have made two fungicide applications this summer (Mid-June and early July). However, the weather in our area has turned off hot and dry and the spread of the disease has slowed dramatically.
We got a late start in spraying for scab this year because I kept waiting for pecan nut casebearer to appear (it never did) before making a trip through the orchard with my sprayer. As a consequence, we have a light scab infestation on susceptible cultivars. 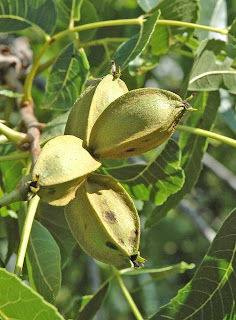 In looking at several cultivars, I found that most scab susceptible cultivars have a non-damaging levels of scab on the shucks. The Giles nut cluster pictured at left is a good example of how our less that perfect scab control efforts have held disease spread to a minimum. 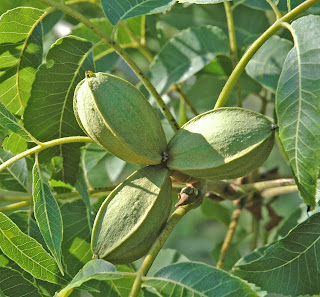 Of course, a scab free cultivar like Kanza looks perfect at this time of year (photo at right). However, it is worth mentioning that Kanza does benefit from receiving fungicide applications. Kanza may be resistant to scab but it is susceptible to pecan anthracnose which can cause fungal leaf scorch and shuck rot. 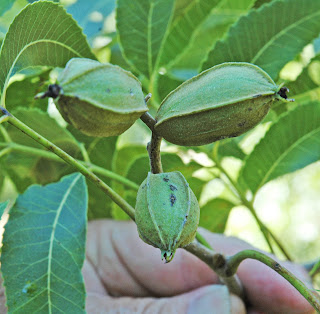 I also looked at Mandan to confirm my assertion that this fairly new pecan cultivar is susceptible to scab (photo at left). It appears that Mandan is not super-susceptible to scab but will definitely require a fungicide program to ensure top yields. 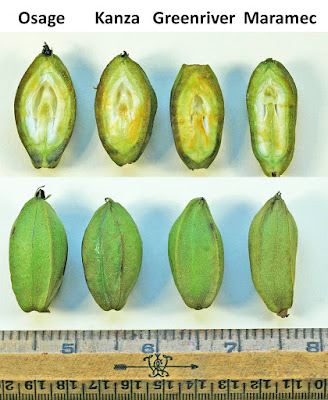 July is the month that you can finally look up into a pecan tree and notice nuts hanging from branch terminals. At this point during the growing season, pecans have entered their rapid growth phase, when nuts grow in size and the kernel tissues begin forming.  Pictured at right are some nuts I harvested today from four cultivars. I chose these cultivars because they range in nut maturity date from very early (Osage) to late (Maramec). At this point in the season, the nuts of all 4 cultivars are roughly the same size but slicing open each nut shows that the progress of kernel development differs. While the nut is expanding, the kernel inside is composed of the seed coat and liquid endosperm (looks like water).
At the start of nut enlargement,  the seed inside the nut is small and heart shaped (like the Maramec nut pictured above). As the kernel expands, the seed coat expands downward towards the base of the nut and you can see two kernel halves start to develop (Osage nut above). Cutting nuts open at this time of year can give you a pretty good idea when nuts will ripen in the Fall (at least in comparison to other pecan cultivars). In the photo above, I've arranged the four cultivars in order of ripening. Osage ripens earliest, followed by Kanza, then Greenriver, and finally Maramec. 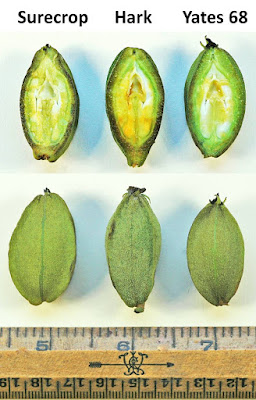 While I was out collecting nut samples,  I decided to pull some nuts from 3 cultivars that are relatively new to our cultivar collection (photo at right). Judging from the size and shape of the kernels, Hark and Yates 68 should ripen about the same time as Kanza. The kernel development of Surecrop looks to be closer to Greenriver.
We may be suffering through the dog days of summer, but cutting open pecans in mid-July only makes me optimistic for a good pecan crop this fall.
Posted by William Reid at 4:58 PM 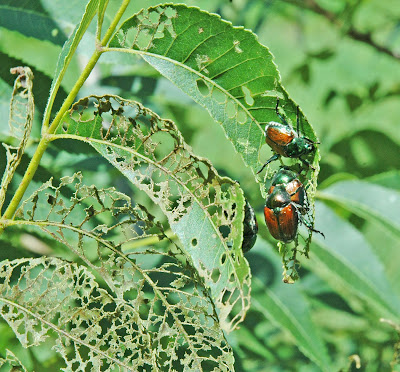 People living along the east coast of the United States have become all too familiar with voracious Japanese beetles chewing the leaves of  trees, shrubs, and garden plants. This introduced pest was first found in Riverton, NJ in 1916 and has slowly spread across the eastern US moving just a few miles each year. This year we've spotted quite a few clusters of Japanese beetles feeding on pecan leaves in Cherokee Co. KS (home of the Pecan Experiment Field).
The Japanese beetle spends most of the year as a C-shaped grub-worm feeding in the soil on the roots of ground cover plants. Adults start emerging in mid-June and aggregate in large numbers on a single plant. The adults feed on over 300 species of plants including pecans. The beetles feed on leaf tissue but only remove tissue between leaf veins. This feeding behavior results in leaves with a skeletonized appearance (photo above).
Adult beetles have bright metallic coloration. The head and thorax are metallic green while the wing covers are copper colored (photo above). Upon emerging from the soil, adults release a strong pheromone that attracts other adults to the same location on the tree. Once aggregated, they feed on leaf tissue then shorty thereafter begin mating. Mated females will then drop to the ground to lay 30-40 eggs in the turf.  Adult Japanese beetles are present for about a month's time, starting in mid-June and continuing until early July.
In our pecan orchard we have found Japanese beetles only on trees that did not receive the insecticide treatment we made in mid-June.
Posted by William Reid at 5:14 PM 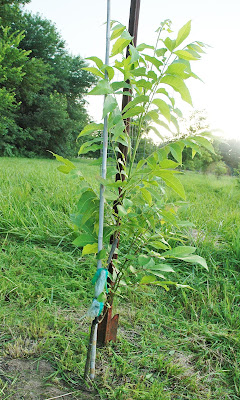 The July 4th Holiday weekend was a great time to work on all 3-flap grafts I made this past spring. A month ago I had visited all newly grafted trees to remove stump sprouts. This time I am going to train the tree to a single shoot growing from the scion and re-wrap the 3-flap graft union.
Since I last visited the tree pictured at right, new trunk sprouts have grown and the scion has developed a nice strong shoot. I grabbed my grafting box and started right to work. 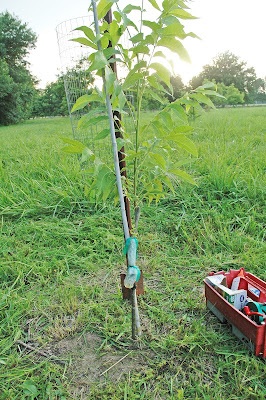 My first job was to trim off all trunk sprouts that had developed below the graft union (photo at left). Hopefully, as the new scion grows in height and diameter, the tree will be less prone to sprouting new trunk shoots in the future. 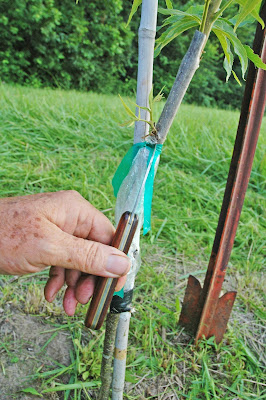 Next, I proceeded to remove all the wraps placed over the graft union back when I originally grafted the tree. When I make a 3-flap graft, I bind the graft union tightly with grafting tape. To allow the graft union to freely increase in diameter as the tree grows this summer, I need to remove that tape.
The simplest method to remove the wraps from the graft is to use a sharp knife to cut the tape, aluminum foil and plastic bag with a single vertical slice (photo above, right). 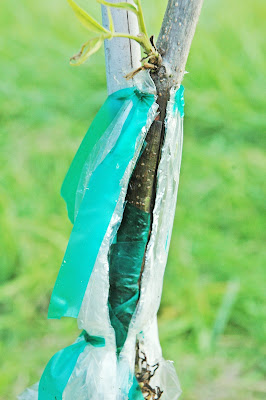 Once cut, I peel back the layers of graft wraps and remove them from the tree (photo at left). At this point, the graft has callused over but the union is still weak and can easily be broken. When pulling off the wraps, I'm always careful not to pull and tug  the graft union itself. 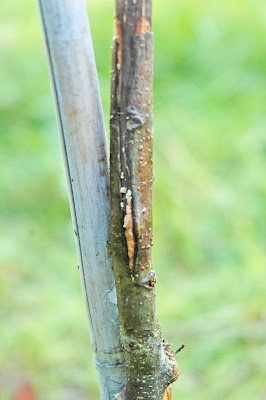 Once I remove the graft wraps, I can see white callus tissue growing between the bark flaps (photo at right). Since this new tissue developed and grew in the dark under the original graft wraps, it is very susceptible sun-scald.  So, to prevent sun injury during the heat of the summer, I will re-wrap the graft union in aluminum foil. 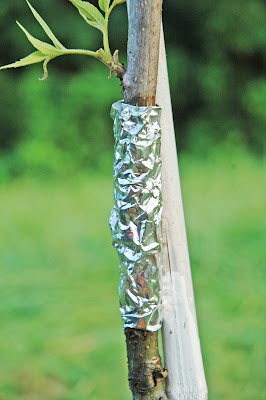 Just like covering the graft the first time, I rip off a piece of foil and place it over the graft union. This time there is no grafting tape underneath. The foil acts as a sun block protecting the tender callus tissue from damage. 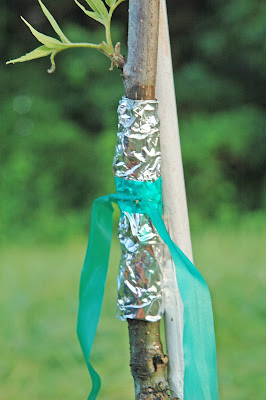 To make sure the foil doesn't get blown off the tree in the wind, I tie a piece of grafting tape around the foil. Once I'm done with the graft union, I turn my attention to other parts of the tree. 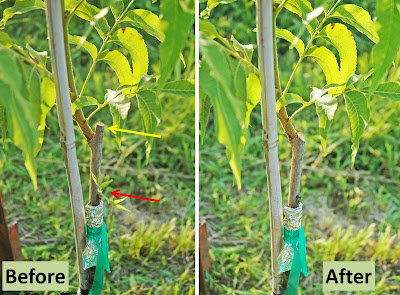 The photo above shows a before and after view of pruning the scion. I want all the tree's energy focused on the one, strong shoot growing from the upper bud of the original scionwood stick. I prune off the lower bud (red arrow) and then remove the stub at the top of the scion (yellow arrow). Removing the stub isn't totally necessary but it will help the tree grow over the wound much cleaner and faster. 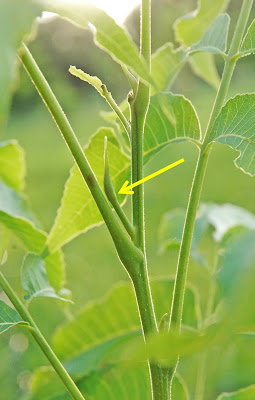 Next I inspect the new shoot growing from the scion. If I see any stalked buds (yellow arrow), I pull them off. 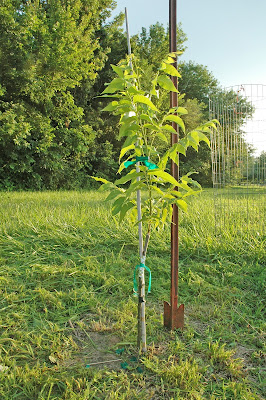 Finally I use some engineer's flagging tape, to tie the scion's new shoot to my bamboo training stick (photo at left). Before moving to the next tree, I'll replace the deer cage over this graft to prevent deer browse (deer cage can be seen in the background of this photo).
I'll be back in 3-4 weeks to add additional ties to the new shoot and to trim off any unwanted new growth below the graft union.
Posted by William Reid at 4:48 PM 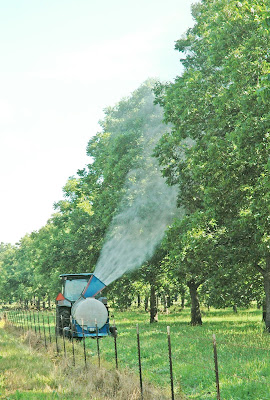 Its been 2 weeks since we made our last scab spray. Since that time its been hot and humid. Pecans are entering the period of rapid nut enlargement--a period when nuts are most susceptible to scab infection.  So between rain storms, we decided to start our second scab spray for the year (photo at right).
We are using a systemic fungicide (Quilt Xcel) so, as long as we get 6 hours of drying time before the next rain, the fungicide should be effective.
Posted by William Reid at 11:32 AM