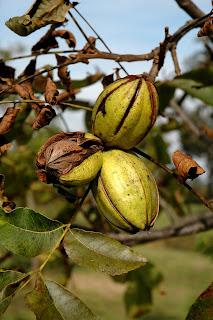 On Thursday October 7th we are going to have a pecan harvest tour to give growers the opportunity to see how all the cultivars in our research trials have performed in 2010. The tour will begin at 1:30 in the afternoon and will be held rain or shine. Since nut split is early this year most cultivars will be fully mature. Come prepared to walk the groves and talk pecan cultivars!.
The tour will be held at the Pecan Experiment Field located 2 miles east of Chetopa, KS and 3/4 mile south on 120th street.
Posted by William Reid at 11:31 AM 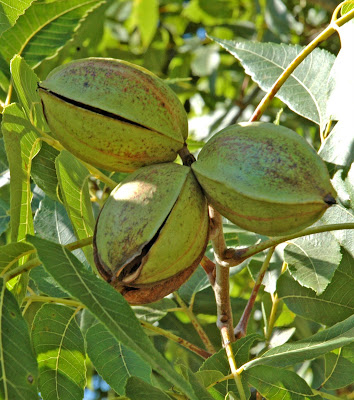 Remember this past spring when everything seems to bloom at one time and we went from Winter to Spring in what seemed like a weeks time? When the early and consistently warm Spring jump started pecan budbreak and shoot development the nut development clock started early. Add above normal summer temperature and we find pecans ripening 10 days to 2 weeks early that normal. In addition, crop quality looks good. Most cultivars are well filled. Thing are looking good for a great 2010 harvest season.
Posted by William Reid at 2:21 PM 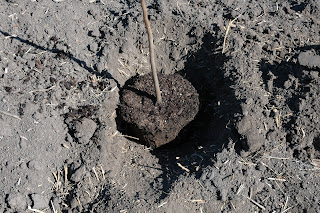 We planted a small parcel of land to more pecan trees seedlings yesterday. We used 'Kanza' seedlings donated by Forrest Keeling Nursery and the conditions for planting couldn't have been better. I used my 6 foot wide rototiller to prepare the soil in each tree row. The tilling left the soil lose and fluffy. We prepared the planting holes with a shovel, digging in the loose soil about 3-4 inches deep. The trees we were planting were grown in containers so the first step in preparing the tree for planting was to remove the tree from the pot. Next, I pruned of any circling roots at the bottom and shook off the loose potting soil. We placed each tree in a shallow hole (photo above) and then covered up the root ball with the loose soil from the tilled strip. We mounded up soil around the tree covering the root ball with at least 2 inches of top soil. By planting the trees in these small dirt mounds (about 4-5inches tall) we should help the trees survive next spring's flooding season. Now if we get that 1/2 inches rain promised for tonight, our tree planting efforts should lead to 100% tree survival.
Posted by William Reid at 10:02 AM

I attended a field day at Forrest Keeling Nursery last week and had a great time visiting with the nursery staff and meeting new people interested in planting pecan trees. It seems the ornamental nursery business is in a slump because of lagging home sales and new home construction. However,  pecan trees sales continue to be strong. In fact Forrest Keeling is having a hard time growing enough trees to meet demands.
During every recession, a movement develops for people to turn back to the land in a search for tangible economic security. Growing pecans is a long term investment that rewards a land owner with both a sense of accomplishment  and good financial returns. Its no wonder pecan trees are soaring.
Posted by William Reid at 5:03 PM

Sometimes it takes a little time

This past spring I received some scions from a potentially good seedling tree growing in IL. I grafted a scion onto a tree in my yard so I could keep a close eye on the graft's progress. 3 weeks after grafting, the tree was suckering profusely but the buds on the scion showed zero movement. So I stripped off all the suckers, trying to force the graft to push. A couple weeks later the primary bud on the uppermost bud started to push, but the suckers had also restarted.  So again, I removed all new growth below the graft thinking with just a little more push, my graft will take off.
A few weeks later it was time to check the progress of  my grafts. I looked at my new graft from IL and found that the new shoot on the graft, that had so much promise, had lost all its leaves and was starting to wither. Now the primary bud nearest the graft union was starting to push. Again the suckers below the graft were coming on strong and again I stripped them off the tree.
A few weeks later, I looked hopefully at my slow-poke graft. This time the lower shoot was starting to wither and the secondary bud under it was starting to push. What is going on with this tree? One thing is for sure--the understock was determined to grow. It was early August at this point but I was determined to make this graft grow. So I stripped all the suckers off for the 4th time.
Now it's early September and my little IL graft is finally growing normally. But this graft is only one foot in length compared to the 4 to 5 feet of new growth I've seen on my other grafts this year. The suckers have stopped and it seems like this tree is finally decided it will accept the graft. Now let's hope the graft survives the winter. It looks like some trees might require a little more effort to get grafted.
Posted by William Reid at 4:13 PM