Pecan cultivars ripening on the last day of September

I found several more cultivars that have split open their shucks today. Kanza was split which seems earlier than normal. In contrast, the other cultivars I found with shucks split seemed to be ripening right on schedule. Photos at right and below. 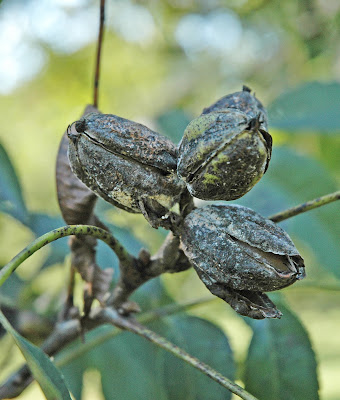 Over the past two weeks I've been trying to make a photographic record of when pecan cultivars ripen at the Pecan Experiment Field. But when it came to determine a shuck-split date for Hirschi, the susceptibility of this cultivar to pecan scab makes it nearly impossible  to tell when the shuck opens normally. In the photo at right a cluster of Hirschi nuts is covered with scab lesions. two of the nuts have tightly held shucks while the third appears to be opening up. 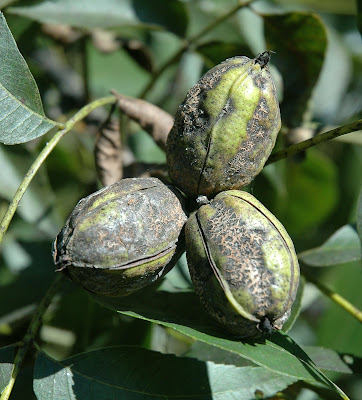 On the same tree, this cluster of Hirschi nuts has less scab covering the shuck but the shucks have yet to open (photo at left). 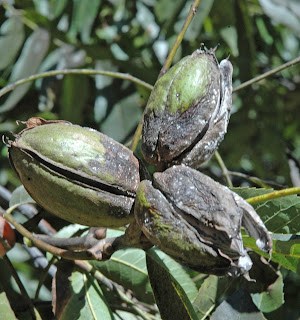 Five days later I went back to look over Hirschi to see if the nuts had opened up and I found at least one nut cluster with normal looking shuck split (photo at right).
Pecan scab interferes with normal shuck opening. Based on what I've found by watching Hirschi this fall, scab can both delay and inhibit shuck split. From past experience I know that Hirschi ripens early, but this year's true shuck-split date for this cultivar was masked by scab covered shucks.
Posted by William Reid at 12:47 PM

Today was a beautiful day go to the field and look for more cultivars with split shucks. The cultivars shown at right and below are all pecans that we haven't gained a lot of first hand experience with. Faith and Gardner are two cultivars that are very similar to Pawnee in nut size, shape, and shell-out but both ripened just a few days later than Pawnee.
Hark, an impressive seedling of Major, split shuck ahead of both Major and Kanza (Kanza=Major X Shoshoni).
Surecrop is a pecan named and propagated by Stark Bros. Nursery with the original tree found in Carlinville, IL. Waccamaw is a seedling of an unknown cultivar with the original tree growing in Golden City, MO.

After a week of warm and dry weather, I searched our pecan cultivar trials for more nuts that have split open their shucks. This time I found several USDA clones ripe as well as several well known pecan cultivars. Photos of these cultivars appear at right and below (I couldn't resist taking a photo of a eight-nut Pawnee cluster). 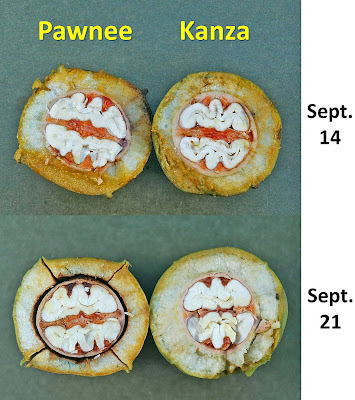 During the first half of September we received several, much-needed rain showers. The additional moisture has had a big impact on pecan kernel fill, helping to fully pack the inside of the shell with kernel. Last week I collected nut samples from four pecan cultivars and then this week, I collected nuts from the same cultivars. I cut open the nuts in cross-section and then photographed kernels. By comparing the photos taken a week apart you can see how pecans fill their kernels late in the season.
The photo above shows two cultivars. Pawnee nuts are shown on the left and Kanza on the right. The nuts collected last week are shown above the nuts collected this week.
Now let me point out some key differences between last week's and this week's pecans. First, note that the Pawnee shuck has separated from the shell. Pawnee should be in full shuck split by the end of this week. Now focus on the packing material between the kernel halves and the material that fills the dorsal groves of the kernel. On September 14 this packing material was orange in color and still spongy in character. By September 21, the kernels of both Pawnee and Kanza had expanded significantly and compressed the in-shell packing material. The partition between the kernel halves became thinner, changed color, and became harder. The packing material in the dorsal grooves also became compressed and turned brown in color. 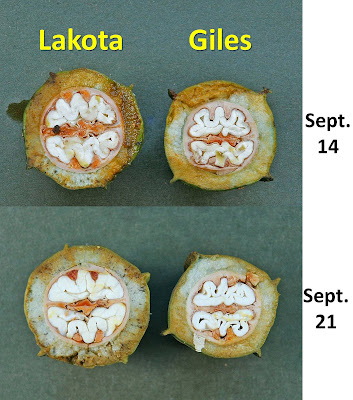 I also collected nuts samples from Lakota and Giles. These two cultivars ripen in mid-October so they are still working on filling their kernels. However, over the past week both cultivars have developed much plumper kernels and compressed internal packing material. Over the years, we have noticed that Giles often struggles to develop full, meaty kernels. Based on the number of air pockets still present in Giles kernels at this time, the 2016 Giles crop will be no different.
Posted by William Reid at 4:45 PM

Today, I spent some time in our pecan cultivar trials and found that some of our early ripening cultivars have started to mature. I found eight cultivars with a majority of their nuts in shuck split (pictures at right and below). In fact, Warren 346 has been split for some time. Just look at the dry and blackened shucks ready to release Warren 346 nuts from the tree.
By the end of the week I should be able to find even more cultivars fully ripe. 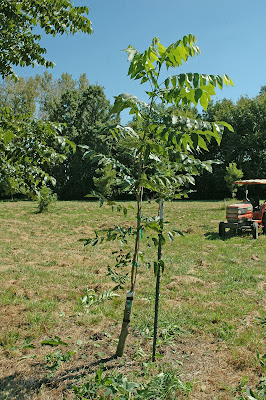 Earlier this year, I posted some photos of grafting onto a sprout growing from a coppiced tree.  Four months later the scion has sprouted a new shoot over 6 feet in height. Its amazing how a 15-year-old root system can push the growth of a scion. However, developing a nice new central leader tree from a thicket of stump sprouts takes numerous trips back to the tree all summer long. New stump sprouts continuously popped up which need to be pruned off. The scion was grows so fast it's hard to keep up with the removal of stalked buds. The results of all this work is a nine-foot-tall pole of a tree (photo at right). At this point, I'm not concerned about the total lack of lateral branches. New branches will sprout next spring from secondary buds and the tree will begin to fill out. 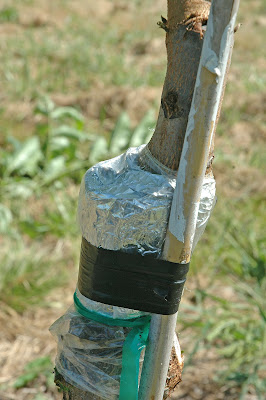 This week I came back the tree to not only prune off stump sprouts and stalked buds, but to unwrap the graft union and give it a coat of white paint. The photo at left shows the graft union still covered in aluminum foil and plastic. Even before unwrapping, I could tell the scion on this bark graft had already grown to cover over one-half of the rootstock stump. 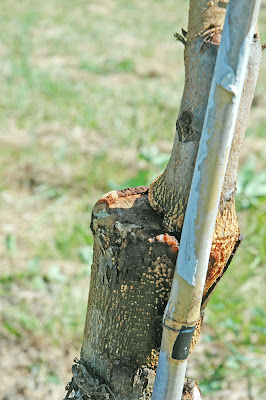 Once I uncovered the graft, I could see the the scion was growing over the rootstock stump and the rootstock had developed a ring of callus tissue around its upper edge (photo at right). Now that you can see the graft union let me point out a couple of things. 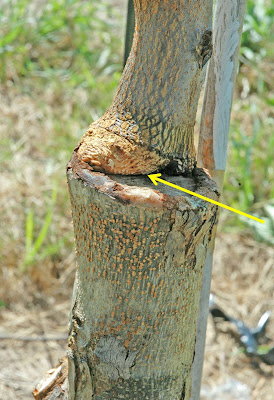 As the scion grows in diameter it never does unite with the woody portion of cut surface of the rootstock. In the photo at left, the yellow arrow points to a gap that forms between scion callus tissue the woody center of the rootstock. The scion never joins with the wood at this point but simply grows over the stump, sealing over the dead woody tissue.  This is why bark grafts remain structurally weak until the stock is completely covered by the scion. 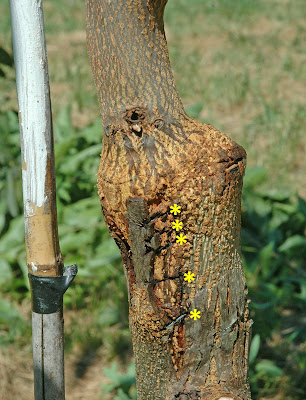 On the back side of the graft union you can still see the staples I used to make the graft. In the photo at right each staple is marked by a yellow asterisk on its right. The bottom-most staple is still clearly visible but the other four staples are becoming buried in the bark. The tree will eventually cover over all these staples and they will forever be sealed inside the trunk. 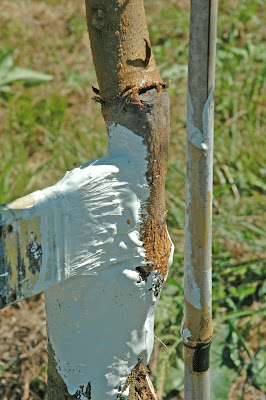 I like to remove all the wraps from my grafts in late summer so ants and dogwood borers don't make permanent homes under the aluminum foil. Since the graft union has been covered all summer long I like to paint the union with white paint to provide protection from sun-scald (photo at left). I use white, exterior-latex house-paint to reflect the sun and leave a highly visible record of which trees have been successfully grafted. 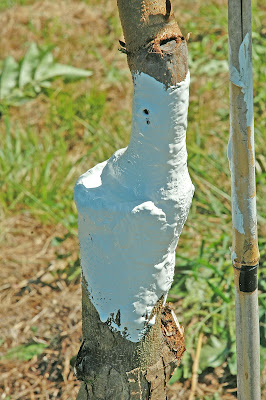 I apply paint to both the stock and scion (photo at right). Once the paint dries, I'll reattach the bamboo support stake to the tree to help prevent wind damage to the scion. 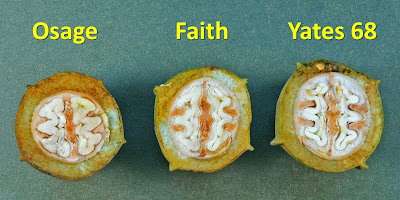 By the first day of September all of our pecan cultivars were actively packing kernel into their nut shells. However, when I cut open nuts from different cultivars I still noted differences in the degree of filling. The three cultivars pictured above illustrate some of these differences.
Osage is the earliest ripening cultivar of the three and the nut that has the greatest amount of kernel packed inside the shell. Note that the Osage kernel has expanded enough inside the shell to begin compressing the inner-wall partition that separates the two kernel halves.
The Faith pecan is slightly behind in terms of kernel filling. I can still see a obvious line between the kernel tissue deposited on the dorsal side of the kernel half and the tissue deposited  on the ventral side. The inner-wall partition inside this nut is still fairly wide; the kernel has not yet grown thick enough to apply compression pressure.
The kernel tissues of Yates 68 contain both white solid kernel and a layer of  jelly-like kernel between upper and lower portions of solid kernel. Air spaces between kernel and the shell can also be seen. Yates 68 is at least 10-14 days behind Osage in terms of kernel filling.

When I cut nuts in cross section to check on kernel development,  I also notice big differences in the thickness of green shuck that covers the pecan. The three cultivars pictured above produce nuts with similar shell diameters. But, look at the massive differences in shuck thickness. Gardner has a very thin shuck while the Kanza shuck is very thick. As far as I can tell, shuck thickness does not impact  important cultivar attributes such as yield, nut size, kernel percentage, or disease susceptibility. However, after looking at the photo above, I'll never judge a nut by the size of the green shuck again.

Cultivars that ripen in mid-October in our area still have a long way to go to fully fill their kernels (photo above). Lakota and Giles ripen in SE Kansas at the same time each fall, usually around Oct 16. I placed the early-ripening Surecrop cultivar in the photo for comparison. Notice all the air spaces in the Lakota and Giles nuts. These two later-ripening cultivar also have a thick layer of kernel gel inside each kernel half. Giles and Lakota will not finish kernel filling until late September.
Posted by William Reid at 4:15 PM