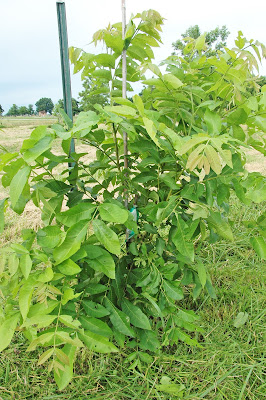 During this last week in June, I've been trying to catch up with trimming all of the grafts I made back in May. That's when I came across the tree pictured at right. I knew there was a graft buried within that tangle of shoots  because I could catch a glimpse of aluminum foil at the center. It was time to start pruning. 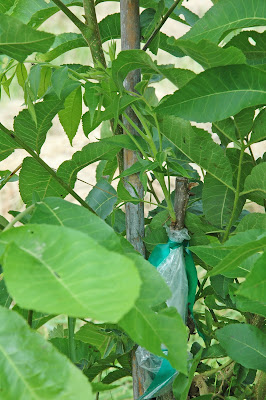 On close inspection I found the scion and noted a small shoot growing from the graft (photo at left). Unfortunately, stump sprouts had grown far more vigorously than the graft and were completely shading  the scion. 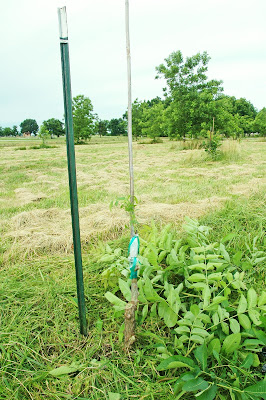 Once I found an actively growing scion, I pruned off all the stump sprouts leaving the scion as the only actively growing shoot on the tree (photo at right). With all the tree's energy now focused on the scion, this new graft should really take off. 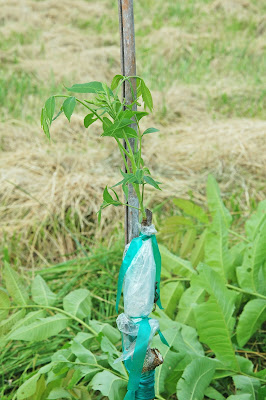 I'll need to return to this graft in a couple of weeks to ensure that more stump sprouts don't form. At that time, I'll tie the scion shoot to the training stick and remove the grafting tape from around scion.
Posted by William Reid at 4:42 PM

Over the weekend we had several light rain showers followed by brutal heat wave. With ample heat and humidity, pecan scab can spread rapidly so I decided to make my second pecan scab spray of the season. This time I used Quadris Top fungicide for scab and added an insecticide (Bifenthrin) to control shuckworm and Japanese beetle.
When spraying at this time of year, I like to get started before dawn and quit before 11:00 am. Airblast sprayers work best when the air has high relative humidity and the spray material fogs up into the canopy of the tree.
Posted by William Reid at 4:57 PM 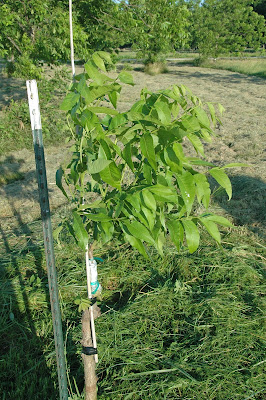 When daily temperatures in June are above average, pecan trees seem to grow faster than normal. This is especially true for successful grafts. So I got up before sunrise to check my grafts during the cool morning hours. The first tree I came to was a bark graft applied to a young tree (photo at right). The scion has made impressive growth just 8 weeks since grafting. 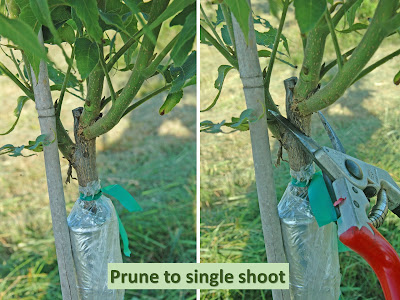 When I took a closer look at the scion, I found that there were 3 new shoots growing from original piece of scionwood (photo above). To encourage the development of a single central leader, I pruned off the upper two shoots and left the single lower shoot to become the new trunk. 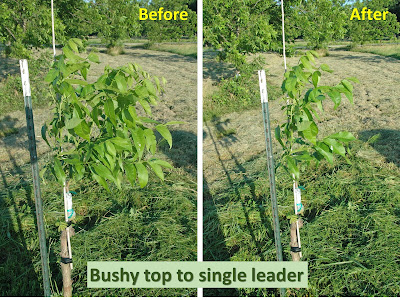 It is amazing how a single pruning cut can turn a pecan "bush" into a central leader tree. Establishing a central early in a new graft's life will help direct wood and stem growth into creating a strong new trunk. 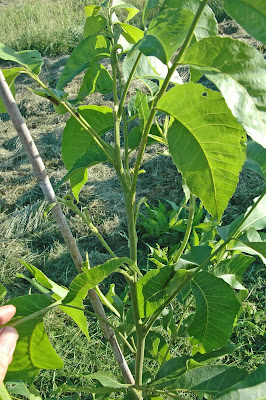 On the remaining single shoot, I noticed the growth and development of stalked buds (photo at left). Look carefully at the photo and notice the long leafless shoots that originate just above the rachis of each pecan leaf. To make sure I direct all new growth into and central leader, I pruned off every stalked bud on the tree. A more detailed description of the problem of stalked buds can be found HERE. 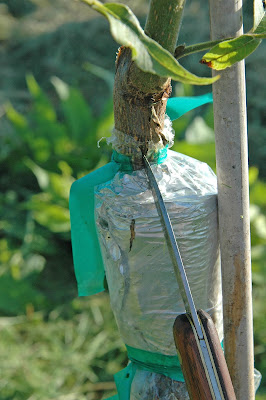 Since this graft was growing so vigorously, I decided to cut off the grafting tape on the scion (photo at right).  At this time, I left the plastic bag and aluminum in place.  By cutting the tape off, I will prevent the possibility of the scion becoming girdled by the plastic ribbon. 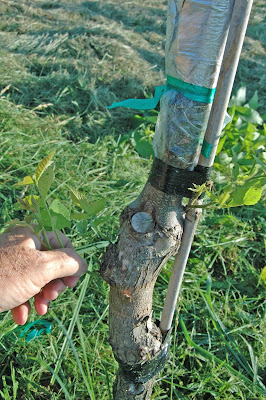 Before leaving this tree, I also took the time to remove any sprouts growing from the main trunk below the graft union. These shoots were so small and new, I just tore them off by hand (photo at left). 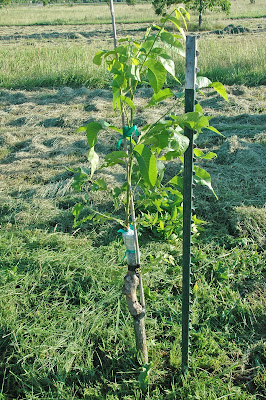 To prevent the wind from breaking out my graft, I used some green flagging to tie the scion shoot to a bamboo training stick. This bamboo stake was taped to the tree with electrical tape back when the tree was first  grafted (photo at right). 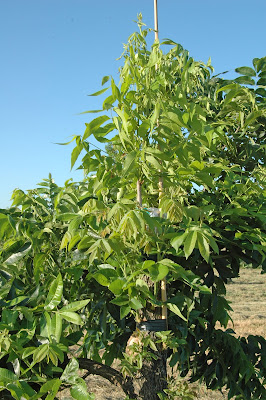 The next tree I came to was another bark graft placed on a much larger tree. In this case,  new shoots were growing everywhere and it was even hard to see the graft union (photo at right). 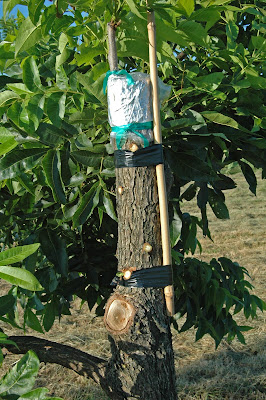 I starting pruning this graft by removing all the trunk sprouts that had grown below the graft union. In the photo at right, you can see all the fresh pruning wounds I made by cutting off sprouts. Once cleaned up, the graft union is back in full sun and ready to promote the growth of the scion. 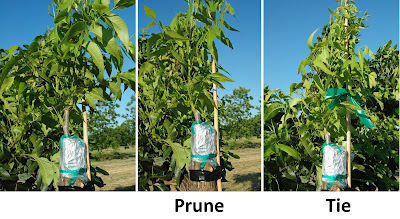 Just like the previous graft, the scion had developed multiple new shoots. So my process was the same; Prune to a single shoot, remove stalked buds, and tie the new shoot to a training stick (photo above). 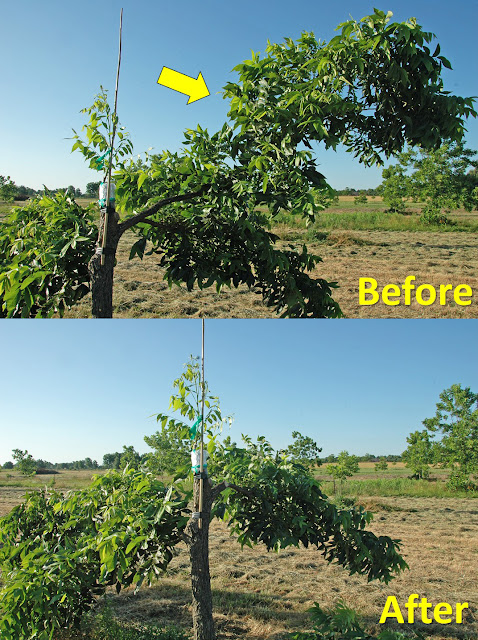 On larger trees, I like to retain some lower limbs to help keep the root system supplied with the carbohydrates manufactured by leaves.  However, on this tree, one of the limbs I left was starting to compete with my graft for vertical supremacy (yellow arrow points to this limb in photo above). To promote my graft as the new central leader, I pruned off the upward growing limb while retaining outward growing limbs to provide important leaf area. 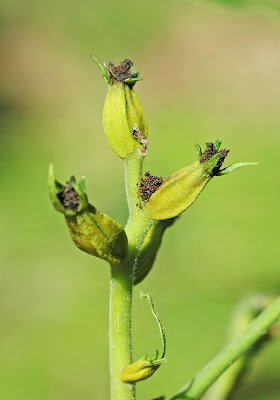 When we scouted our trees this morning we found 3 pecan clusters infested with pecan nut casebearer larvae (3 out of 300 clusters inspected). Casebearer damage is easy to spot. The larva always enters at the base of the nut and creates a pile of brown frass in the narrow axis between the pedicel and nut (photo at right).
We plan to spray our grove over the next few days adding an insecticide for casebearer control and a fungicide for scab control. The weather forecast for this weekend is hot and dry. To get the best spray coverage of the pecan foliage, I'll start spraying at daybreak and quit when temperatures top 80 degrees (F). 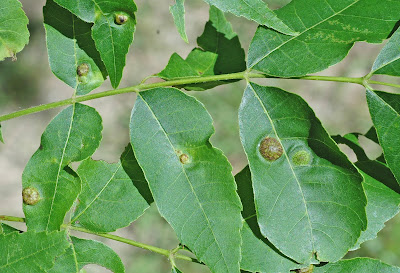 This is the time of year when folks seem to notice bubble-like galls on the blades of pecan leaves (photo at right). These galls are caused an insect called the pecan leaf phylloxera. At this point during the growing season, the small aphid-like phylloxerans are feeding on plant sap from inside the gall. The seasonal life cycle of the phylloxera starts at leaf burst when spring crawlers emerge from the bodies of over-wintering females and crawl to rapidly growing new leaf tissues. As these wing-less females feed on the leaves, they secrete a growth regulating substance that causes the tree to grow a gall around the insect. Once inside the protective gall, female phylloxera give birth to hundreds of young. 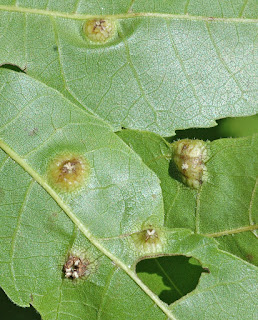 Flip a phylloxera infested leaf over and you might find that some of the galls have developed an opening that almost looks like an exploded volcano (photo at left). A new generation of winged adults will emerge from this hole. The winged adults will mate and impregnated females will migrate to a hiding spot in pecan bark. The phylloxerans will remain dormant until next spring when a new generation of crawlers emerge from the body of the overwintering female. 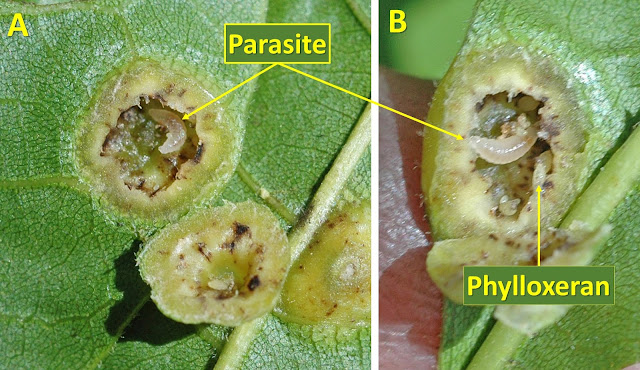 Email ThisBlogThis!Share to TwitterShare to FacebookShare to Pinterest
Labels: phylloxera 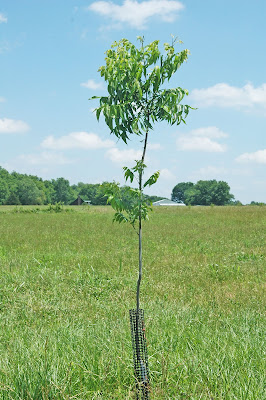 I drove by a young pecan tree in my orchard and it had turned into what I call a "lolly-pop tree" (photo at right). The tree had a nice central leader but was topped by bushy ball of leaves. The ball on top was actually four new shoots that had sprouted from the top of last year's terminal. This growth pattern is normal for pecan but is the leading cause for a tree to lose its central leader. I've discussed this growth pattern in detail in a previous post HERE. 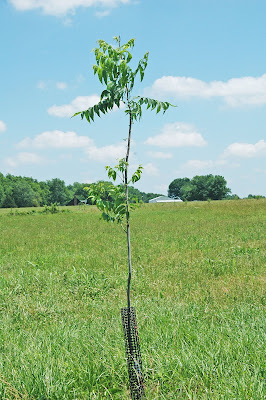 At this point in the growing season, a couple of quick snips with the pruning shears will quickly re-establish a dominant central leader while encouraging lower buds to grow and form lateral branches.  The photo at left shows my "lolly-pop tree" after I cut off three of the new shoots growing from the top. I left the one strongest shoot to form a new central leader. This entire process took only a few seconds and will save me from having to make corrective pruning cuts next winter.
Posted by William Reid at 9:46 PM