What happens when Kanza over-produces 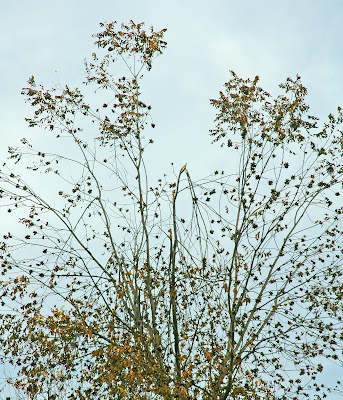 Kanza has been one of the best cultivars for our region. But no pecan cultivar is perfect. This past growing season (2016) was the first time I've seen Kanza produce too many pecans. The crop was so heavy on some trees that we saw upper limbs snap under the weight of the crop (photo at right). What was interesting to me was how Kanza responded to the excessive nut load. 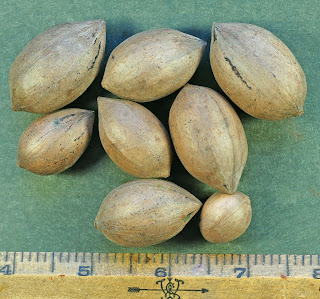 After harvesting our Kanza crop, I noticed that the size if the nuts was far more variable than in previous years (photo at left). Nuts differed is size from larger than average to very small. For the purpose of taking a photo, I combed through a super sack of Kanzas to find pecans that would represent the kind of variation I was seeing. The majority of nuts were medium sized however I definitely noticed a sprinkling of small nuts in the sack.
To give you an idea of the variation in nut size I found I weighed the 8 nuts in the photo. The table below gives you my results. In looking over the numbers, its good to remember that our long term average for Kanza is 5.15 grams per nut. You can definitely see that I tried to pick out the extremes in nut size for the photo.

Over production not only effected nut size but influenced kernel fill. In cracking out Kanza nuts this year I found most nuts were plump and perfect as usual. But, I also found kernels the had hollow looking undersides. It became clear to me that this year's Kanza crop was suffering from over production. However, how our trees responded to the overproduction is fairly unique among pecan cultivars. In my experience, trees that bear too many nuts respond in one of two ways; They produce a tree full of small nuts or all the nuts have normal size but the kernels are poorly filled. Kanza seems to do a little of both, while still producing a majority of nuts with high quantity. However, I've learned a valuable lesson in 2016. Like most improved pecan cultivars, Kanza would benefit from mid summer tree shaking to reduce excessive nut production.
Posted by William Reid at 5:17 PM

Email ThisBlogThis!Share to TwitterShare to FacebookShare to Pinterest
Labels: kanza 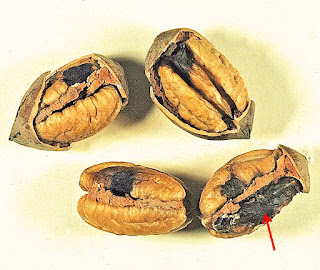 Over the past several years we have been making a special effort to prevent stink bugs from feeding on our nut crop. For the most part we've been fairly successful. However, we didn't start our stink bug control program early enough in the season to prevent black spots from developing on the kernels of very early ripening cultivars. The photo at right shows several Osage pecans damaged by stink bug feeding. As a very early ripening cultivar, Osage enters the dough stage at least a week before many of our standard northern pecan cultivars (Kanza, Pawnee, Major, Giles etc.). To prevent this type of kernel damage on Osage, we should have made a late July pesticide application in addition to our normal stink bug prevention program that begins during the first week of August.
Stink bug feeding can cause more than just black spots on the kernels. Note the pecan in the lower right portion of the photo. A red arrow points to a large blackened area on a kernel half. When stinkbugs feed on pecan kernels, their digestive fluids kill a portion of the kernel leaving behind the characteristic black spot. However, during feeding, the stink bug can also introduce bacteria or fungi inside the shell. These organisms break down kernel tissue and cause large areas of the kernel to turn black. Ultimately, controlling stink bugs will prevent both types of kernel damage pictured above.
Posted by William Reid at 5:07 PM

View from the office 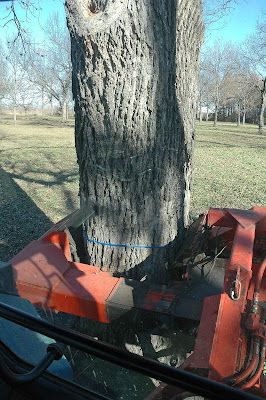 Many of my regular readers might have wondered what happened to the stream of frequent posts that many have come to enjoy. No, I haven't run out of ideas to write about. I just haven't been able to type or take good photographs. Several weeks ago, I suffered a shop accident that required numerous stitches to my left hand. Needless to say the injury slowed me down but I was still able to drive a tractor and shake pecan trees. So, for much of December, my office became the cab of a tractor with my view being the trunks of native pecan trees (photo at right).
My hand is well on the way of healing. I can once again take photographs with confidence and type blog posts for my readers. Look for more posts this week.
Posted by William Reid at 4:30 PM