Yesterday, I spent the day in a hydraulic lift evaluating the nuts of pecan trees in our pecan breeding trial. I found 14 pecan hybrids that had split shuck since my last trip thru the orchard (Sept. 20)  As I traveled down the row of pecan crosses, I came to tree KT143. This tree has a special place in the history of our pecan breeding project. KT143 was the very first tree in the planting to start bearing pecans and has produced a crop every year since. KT143 is the result of a cross between Pawnee and Major. The nut appears to be scab resistant and the shucks opened before either parent this year (photo above). 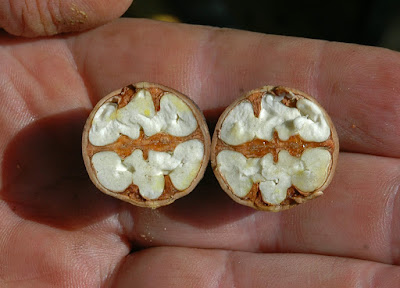 Of course, its whats inside the shell that counts when evaluating pecan hybrids. My records from previous years tell me that KT143 averages 7.52 g/nut and produces 54.8% kernel. From a practical point of view, I measured the 2017 crop and found it would drop out of a pecan sizer as a number 15 (15/16 inch).  As you can see from the photo above, the kernels have wide dorsal grooves meaning the kernels will drop free of all shell fragments when cracked. We currently have this clone under advanced testing in a new planting at the Pecan Experiment Field.
Posted by William Reid at 5:53 PM

Yesterday, I found that the earliest ripening cross in our pecan breeding plot had split shuck. So today, I inspected all of our pecan cultivar trials at the Pecan Experiment Field to discover which early ripening pecans had split shucks.
I found three pecan cultivars with split shucks (photos at right and below). Henning and Mullahy are northern pecan cultivars first discovered as native trees. SWB617 is a chance Giles seedling we have at the research station. I expected Warren 346 be be ripe at this time but our trees of this cultivar do not have a nut crop this year. 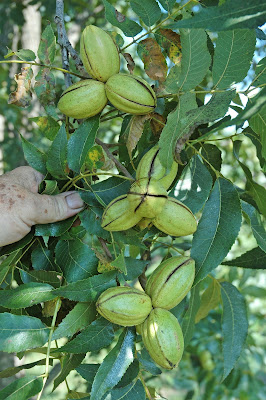 I spent some time today looking at trees in our pecan breeding plot. I was especially interested to see if our earliest ripening hybrid had split their shucks yet. Using our hydraulic lift, I climbed up into the canopy of the tree to find limbs loaded with fully ripen pecans (photo at right). This is a tree labeled as KT337, a cross between Pawnee and Greenriver. So far, this tree has demonstrated good scab resistance and is bearing annually. 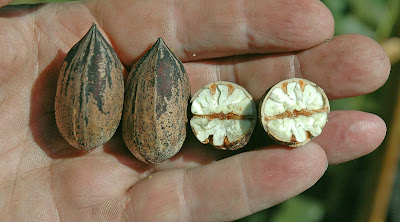 The nuts of KT337 are small in comparison to many modern pecan cultivars but are large enough to produce very attractive kernels (photo above).  The few nuts I pulled from the tree averaged 13/16 inch in diameter (21mm) and were 1.5 inches long (38mm).  The kernel was well packed inside the shell and the dorsal grooves were wide and "v" shaped (indicating the nut meat will fall free from all shell and packing material). I'll be keeping my eye on this one. 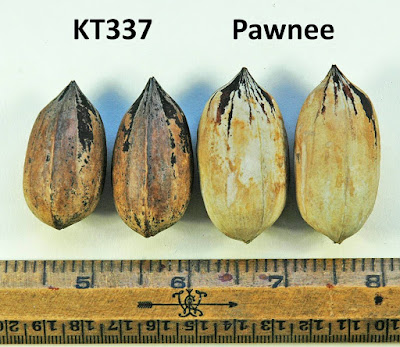 To give you a better idea about nut size, I collected a few Pawnee nuts and peeled the nuts out of the shuck (Pawnee has not split shuck yet that's why the shell color is white). The photo above gives you a good visual reference as to the size of KT337.  The nuts are obviously smaller than Pawnee but not  unacceptably small.
Posted by William Reid at 6:06 PM

Evaluating pecan cultivars in the Boot-heel 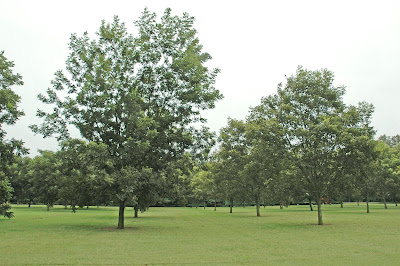 Last week I took a road trip to the Boot-heel of Missouri to visit a pecan cultivar trial established on the farm of Rick and Cindy Faulkner. The grove is located just north of New Madrid, Missouri and is planted on a deep sandy soil that is irrigated regularly. The trees are doing great and all are producing a nice crop of pecans (photo above). 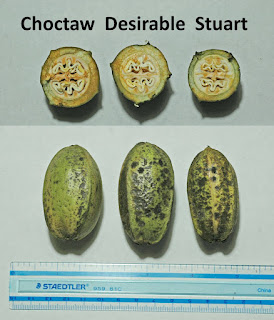 Cindy started her pecan orchard by obtaining some trees locally. The cultivars she found were Choctaw, Desirable, and Stuart; common cultivars in the south but not the best choices for SE Missouri. All three cultivars developed moderate scab infections and all three are late ripening (photo at right). Note the limited amount of kernel development at the time this photo was taken (Sept. 12). Because these 3 cultivars are so late to fill their kernels, the quality of the nut meats at harvest will be effected. During most years, the kernels will be hollow and lack the moist, oily flavor most pecan lovers appreciate. 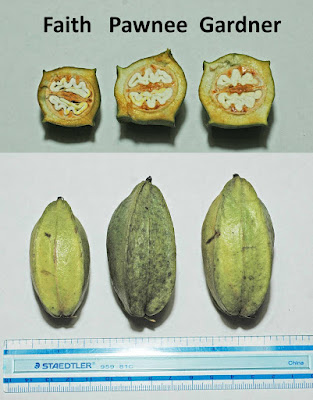 The good news for the Boot-heel is that we now have several early-ripening cultivars that will produce high quality kernels. Faith, Pawnee, and Gardner will ripen in early October and we have all three cultivars in the trial (photo at left). When the photo was taken (Sept. 12), kernel filling had progressed nicely but was not yet complete. These pecan cultivars are susceptible to scab at our location in Kansas and we need to spray them regularly with a fungicide. However, nuts growing at the Faulkner farm were not sprayed in 2017 and I did not notice any signs of scab on Faith, Pawnee, or Gardner. 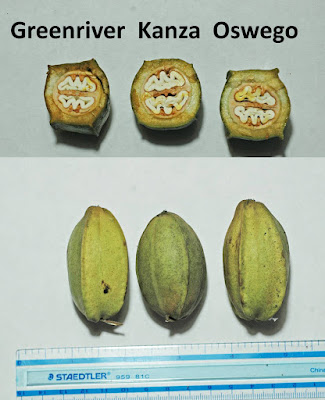 I made sure to include several scab resistant cultivars in the trial at New Madrid.   Greenriver, Kanza, and Oswego have performed well in the Boot-heel. In fact, Kanza has become Cindy's favorite pecan to fill her freezer for personal use. 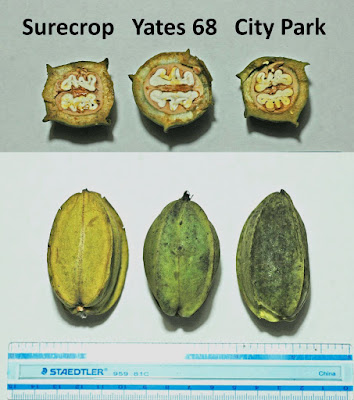 We also established some other early ripening cultivars in the trial. Surecrop, Yates 68, and City Park have performed well but their nuts do not stand out from any of the other cultivars in the trial (photo at left). I did note that the shell of Surecrop was starting to color by early September indicating that this pecan will shuck-split by the end of the month. 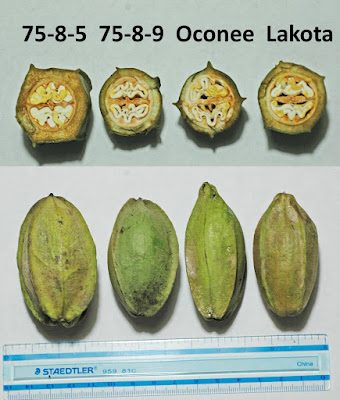 The final set of cultivars in the SE Missouri cultivar trial all originate with the USDA pecan breeding program (photo at right). Oconee and Lakota have proven scab resistance. Oconee was will ripen in late October while Lakota will split shuck in mid-October. I included USDA 75-8-5 and 75-8-9 in this trial because they are supposed to ripen early. USDA 75-8-5 looks well on its way to early ripening but 75-8-9 does not. Neither of these USDA numbered selections looks worthy of propagation at this point. 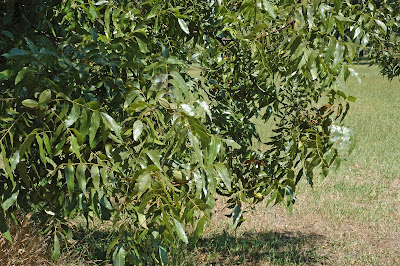 A lot of pecan growers have noticed that the leaves of their trees look like they are constantly wet (photo at right). Touch the leaf and you'll find the leaf is covered in sticky tree sap. Park a car under a pecan tree and the windshield will soon be dotted with sap falling from the tree. Pecan tree sap is not actually dripping from leaves but, what you see is the exudate from pecan aphids. 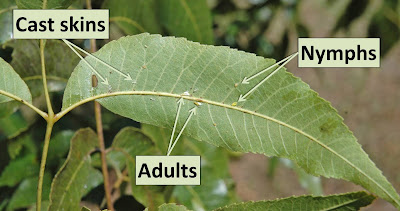 An outbreak of black-margined pecan aphids feeding on the underside of pecan leaflets is common in late summer. As these insects feed on pecan sap, they suck more fluid out the leaf than they can digest. Excess sap is excreted by thousands aphids and ends up coating the leaves below.
In the photo above you can see aphids feeding on the underside of a pecan leaflet. The aphids insert their mouthparts into a main leaf vein and suck sap from the tree. Adult aphids have wings while immature aphids are wingless.
The application of insecticides to control pecan aphids have largely proven fruitless. Pecan aphids develop pesticide resistance very quickly and aphid populations rebound quickly after being sprayed. In our pecan orchard, we concentrate our insect control efforts on pecan weevil and stinkbugs. Pecan aphid populations will eventually crash on their own. A good, heavy rain-shower will clean the leaves from the sticky sap and often help reduce aphid numbers.
Posted by William Reid at 5:42 PM