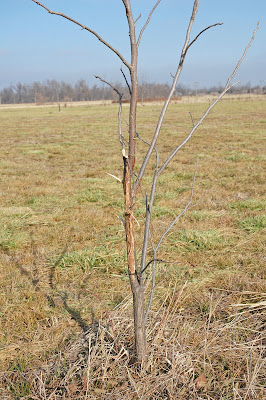 Deer populations across the US have exploded making it increasingly difficult to grow young pecan trees. The photo at left illustrates the most common form of deer damage--buck rub.  Buck deer rub their antlers on 1 to 2 inch diameter pecan trees to remove the velvet from their antlers and mark their territory in preparation for mating season. They choose small diameter trees that are strong enough not the break under rubbing pressure but limber enough to snap back against the antlers as the animal moves his head from side to side. The result of all this rubbing is the complete removal of the bark from a large portion of the lower tree trunk. Come next spring, I will cut this tree off just below the buck rub and place a bark graft on the stump. 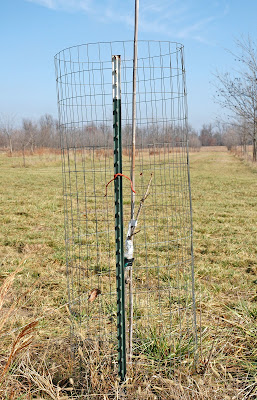 After I graft a tree, I install a deer cage around the tree to protect the new graft from deer browsing (photo at right). The cage is constructed from six feet of 5-foot-tall welded wire fencing (2 inch by 4 inch grid). I use a steel fence post to hold the cage in place (tied with baler twine). In the photo, a bamboo stake is attached to the tree to provide support for the growing graft.                       I leave the deer cage around the tree until it has grown large enough to heal over the bark graft union and tall enough to emerge out of the top of the cage. During the growing season, I remove the cage at regular intervals so I can prune the tree according to the 2-foot rule. After every pruning session, I re-install the cage. 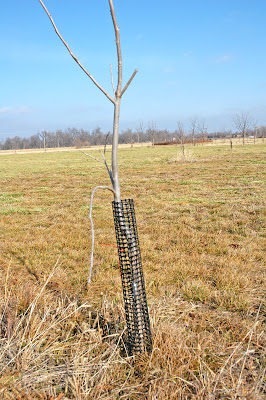 Once a grafted tree has grown large enough to provide me with 3 feet of  clear trunk, I remove the welded wire cage and replace it with a plastic trunk protector (photo at left). These trunk cages look like there are made out of 1 inch by 1 inch welded wire but they are actually a very stiff plastic material formed in a 6 inch diameter cylinder. The trunk guard is split along one side so you can slip the guard around the tree. I use baler twine to close the edges of the tree guard together so it forms a complete cylinder around the trunk. The primary purpose for installing these trunk guards is to prevent buck rub and so far they have done a great job. I'll leave the trunk guards in place until the tree has grown to about 5 inches in diameter. At that point, the deer seem to leave my trees alone (Although, they do like to eat any nut that hits the ground).

Email ThisBlogThis!Share to TwitterShare to FacebookShare to Pinterest
Labels: deer


In testing new pecan cultivars, its important to evaluate each clone over several years and at several locations. This year provided some good examples of how location can effect cultivar performance. 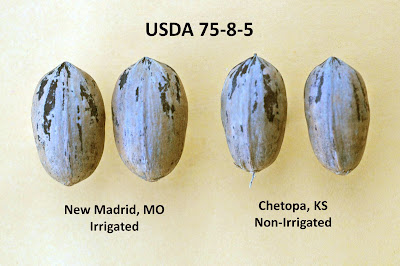 We are currently testing two early ripening clones developed by the USDA pecan breeding project at several locations. The photo at right shows nut samples of USDA 75-8-5 collected from two locations--Chetopa, KS and New Madrid, MO.  At the Chetopa site the trees are growing in a heavy clay soil without irrigation while in New Madrid the trees are growing in an irrigated sandy soil. Both locations suffered extremely hot and dry summers but you can definitely see the benefits of irrigation on nut size and shape. 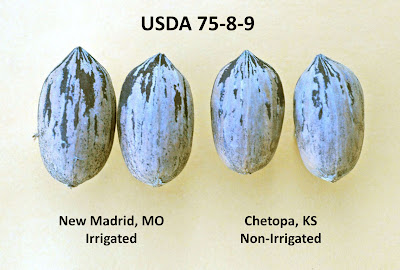 In the photo at left, you can see that USDA 75-8-9 behaved just like its sibling clone; The nuts produced under irrigation were larger and plumper that the nuts produced without irrigation water.
Last summer, soil moisture availability had an  overwhelming impact of nut size and shape. However, during years of normal rainfall we would still see differences in nut size between these two locations. Trees growing in heavy clay soils tend to produce smaller pecans than trees of the very same cultivar grown in loamy or sandy loam soil.  But, there is one advantage of growing pecans in a heavy clay soil--Clay soils have a greater soil moisture holding capacity. During drought years, quality kernels can be produced without irrigation in a clay soil while kernels produced by trees growing on sandier, non-irrigated soils will be shriveled.
Posted by William Reid at 5:34 PM

I am a fan of the Kanza pecan cultivar. These beautiful, tasty and easy-to-shell nuts are the only ones that end up in my freezer (photo at right).
Over the past few years I've been sharing production records from a block of Kanza trees we established in 1995. Last winter we removed 7 trees from this block of 112 trees as part of a planned tree thinning operation. What is interesting is that nut production did not drop significantly from 2011 to 2012 despite the loss of 6% of the orchard's trees.
Weather conditions during the 2011 and 2012 crop years were similar; both summers were hot and dry. In 2011 we averaged 899 lbs/acre from this young orchard, while in 2012 yield averaged 810 lbs./acre. I was really surprised that the cumulative effect of two years of  drought did not impact the 2012 crop even more that it did. 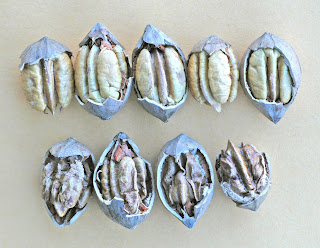 I've been cracking Kanza nuts over the past several days and have noticed a few nuts with severe kernel defects. In the photo at left, the 5 nuts in the top row are indicative of the quality of nuts produced by Kanza this year. However, as you can see by the four nuts in the bottom row of the photo, I've also found a smattering poorly filled and dark kernels in our cracked Kanza nuts. Fortunately, the number of these wafer-like kernels is probably less that 0.1% of all cracked nuts. But this makes me wonder: Is  this year's lower Kanza yield due in part to a greater number of light nuts being blown out of the cleaner or removed from the picking table as stick-tights? I think so.
Posted by William Reid at 3:55 PM 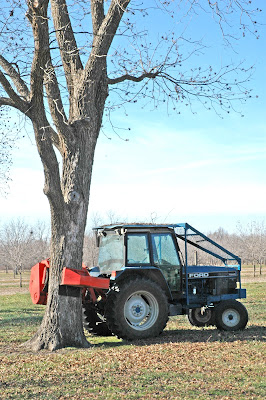 Lately, I've been spending a lot of time in the cab of this tractor enjoying the sound of nuts hitting the roof as I shake our native trees (photo at right). Ever since 1981, we've been collecting yield data from the same 6 one-half-acre plots of native pecans in order to provide baseline data for economic projections.
In spite of the 2012 drought, our native plots produced the second highest yield on record. We averaged 1936 lbs./acre this year. Our highest recorded yield was 2145 lbs./acre produced in 1997. If  the summer of 2012 had provided plentiful rainfall and the larger average nut size that comes with adequate moisture, 2012 might have set a new record.
The big crop this year was set up by the combination of 2 major weather events, both occuring in 2007. The Easter freeze of 2007 destroyed potential nut production by freezing emerging flower buds. During the fall of 2007 we harvest only 490 lbs./acre. This freeze set in motion an alternate bearing pattern that has continued since that time. We currently expect larger crops in even numbered years.
Later, during December of 2007 we had an ice storm that ripped 50% of the branches from our trees. The removal of so much of the tree's canopy ended up reducing what should have been a big crop in 2008 by more than half.  Since that time our trees have been growing back new limbs and refilling their canopies. The 2012 season marks the first time since 2006 that our native trees have returned to their full nut producing potential. The last ten years of native pecan production from our plots is shown below. 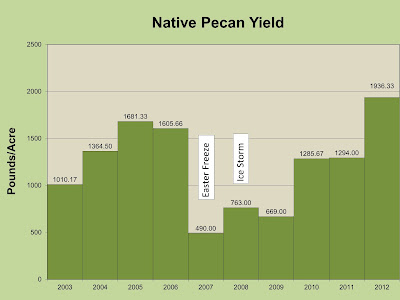