How wide a border? 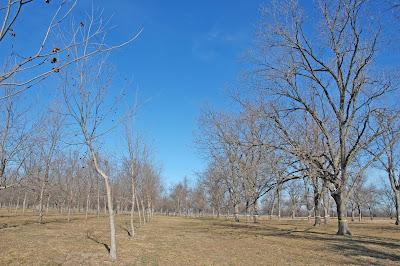 It is easy to find recommendations for spacing pecan trees in a new pecan planting. I usually recommend an initial spacing of 35 to 40 feet between trees when setting out a new orchard. But I've never seen anyone talk about the space that  should be left between a new planting and established pecan trees or adjacent woodland.
In the photo above, a row of young Kanza trees (left and west side) are growing next to a block of large native pecan trees (right and east side).  Note how the Kanza trees seem to be leaning away from the natives. Even though the limbs of Kanza and native trees are no where near touching, the large native trees seem to exert their presence in forcing the Kanza tree grow westward, away from the crowns of the larger trees. There are 45 to 50 feet between native and Kanza trees pictured above. 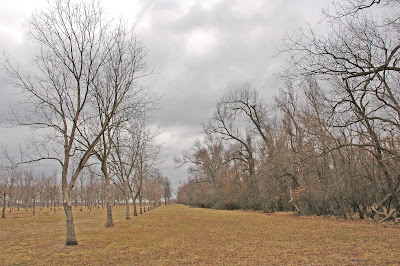 Now let's look at another situation. The photo above shows a row of grafted trees (left and west) adjacent to woodland (right and east). The distance between pecan trees and woodland is 60 to 65 feet. In this case, the pecan trees have had enough space to grow normally without obvious influence from the large trees in the adjacent forest.
If you are establishing a new pecan planting, my recommendation would be to plant no closer than 60 feet from adjacent established trees (native pecans or woodland). This spacing should ensure balanced top growth of your new trees. 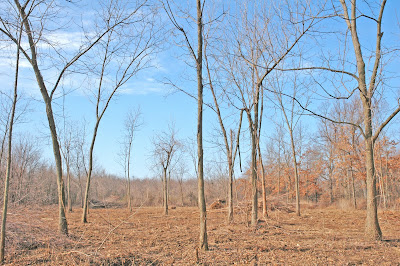 Every native pecan grove starts out as a forest of river-bottom, hardwood trees that includes pecan in a mix of oak, ash, hackberry, and hickory. With high pecan prices comes increased interest in developing native stands of pecan trees into productive groves. Pictured above are native pecan trees that have just been released from a forest of competing trees. In the background, you can still see some pin oaks (pin oaks hold their brown leaves all winter long) that have yet to be cleared and brush piles waiting to be burned. 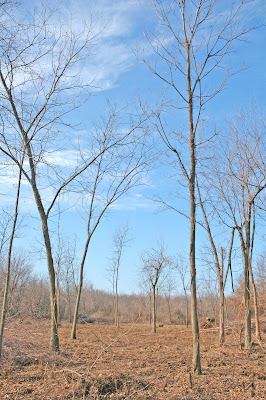 Trees that have just been released from the forest are tall and narrow (photo at left). Over the next few years, these trees will take advantage of increased sunlight and start to fill out their crowns and maybe even produce a few nuts. Note that the trees in this native grove are fairly young (under 16 inches DBH). These smaller native trees will respond to fertilizer and sunlight much faster than mature trees (>36 inch DBH), giving this grove a much greater potential for a rapid increase in nut production..
Clearing a new native grove is a lot of work but it still remains the fastest way for expanding your pecan acres. Over the next few months and years, I'll be watching this native grove for signs of further development. Will a ground cover be planted? Will we see cattle grazing under the trees? How soon will we see a nut crop? Only time will answer these questions.

In their 16th year (2011), our Kanza trees produced 899 lbs/ac. The same block of trees produced 1050 lbs./ac the previous year. We usually expect that yield for young trees increases year-over-year as the trees grow larger. So what happened in 2011?
We ran into a spell of dry weather in 2011 that radically shrank the size of each nut produced by our Kanza trees. In the photo above, the nut on the left was grown in 2010 and was near normal in size, weighing (7.42g). In contrast, the nut on the right is from our 2011 crop. It is much smaller and weighs only 5.57g or three-quarters the weight of the 2010 nut. Using some simple math, I calculated the yield of our Kanza trees if they had produced the same sized nuts in 2011 as they had in 2010. That calculation predicted that we would have harvested 1198 lbs./ac if we had adequate rainfall in 2011. Nut production continues to increase in this young Kanza orchard--the drought of 2011 just made it hard to see.

One of the best characteristics of Kanza is that it seems to adjust to any weather conditions and still produce a quality kernel. I raided my freezer at home to find 2 two boxes of Kanza kernels--one from 2010 and one from 2011 (photo at left). In 2010, Kanza kernels averaged 3.82 g/nut while the 2011 kernels averaged only 2.85 g/nut. The difference in kernel size is visible in the photo (2010 on the left and 2011 on the right). However, despite their smaller size, 2011 kernels were still plump and golden. Folks sometimes complain that Kanza is too small, but I find it easy to sell quality kernels at any size.

'Giles' is a cultivar that originated in the Neosho River flood plain in Cherokee County Kansas, a couple of miles from the city of Chetopa. The original 'Giles' tree was found in 1930 as a native pecan tree in a grove owned by Mr. A.E. Giles. The cultivar was first widely propagated in the 1950's and became the dominate cultivar used in Kansas pecan orchards during the 1970's. Today, 'Giles' has been replaced in popularity among growers by scab resistant cultivars such as Kanza or Lakota.
'Giles' nuts are easily identified in the field by an interesting characteristic not shared by other cultivars. 'Giles' nuts are often crooked. In the photo above, notice that the apex of the nut points to the right. In fact, the whole right side of the nut appears shorter than the left side. Crack the nut open and you'll find one kernel half shorter than the other (photo above).
Although every 'Giles' nut on a tree may not be "crooked", the vast majority display this characteristic to some degree.  Crooked nuts are not the result of disease or improper fertilization, asymmetrical nut development is controlled genetically.  This simple quirk of nature makes 'Giles' one of the easiest cultivars to identify from a nut sample.
Posted by William Reid at 3:37 PM 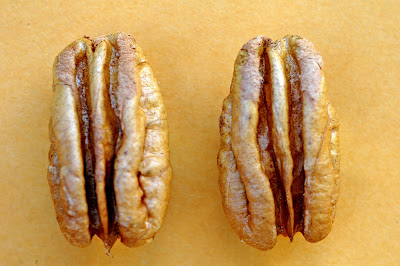 One of most common questions I receive about pecans is about a kernel defect commonly called "kernel fuzz". In the photo at right are two 'Giles' kernels, each covered with patches of brownish tan "fuzz". Using your fingernail, you can easily scrape off the flaky brown patches to reveal a normal looking kernel underneath.
Kernel fuzz is not a disease and the brown material that is adhering to the kernel surface is not dangerous to eat. It only tastes dry and bitter. The fuzzy material on the kernel is actually part of the nut's inside shell packing material.
In a previous post, I presented photos of the nut filling process of 'Giles' pecan nuts. I explained how the expanding kernel compacts both the inner wall partition and the packing material that surrounds the kernel inside the shell.  Fuzzy kernels occur when the kernels don't exert enough pressure on the packing material to compact it tightly together and against the shell. This occurs under two circumstances--not enough water or not long enough growing season.
Dry weather during kernel fill can inhibit full kernel development, causing poorly filled kernels. These poorly filled kernels are often covered in fuzz especially towards end of the kernel. The 'Giles' kernels pictured above are an excellent example of fuzzy kernels caused by drought.
Growing late-maturing cultivars in an area that doesn't provide enough summer heat also leads to fuzzy kernels. In this case, long-season pecan cultivars just run out of time to fill the kernel before the cool days of fall arrive. Kernel expansion ceases prematurely in response to cooler temperatures and shorter day length. The packing material isn't compressed fully and the result is fuzzy kernels. In Kansas,  we find the southern cultivar, 'Stuart', and seedlings of 'Stuart' prone to fuzzy kernels.
Posted by William Reid at 8:46 PM

Making the Decision to Thin Trees 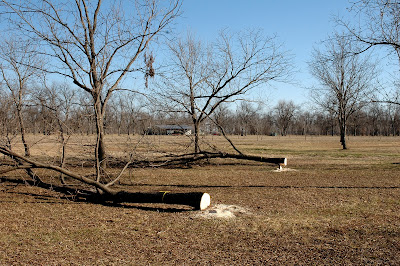 Thinning an orchard is usually the toughest job any pecan grower under takes (photo at right). The hard part is not running the chainsaw, but having to watch trees, that you spent years growing, fall to the ground.  At first, a recently thinned orchard looks sparse. But, within a few years the remaining trees grow rapidly to fill the space. A year or two after thinning, you will start wondering how in the world you ever mowed around so many trees (before you thinned). 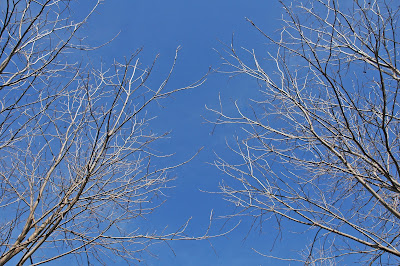 Determining when to thin an orchard is often difficult. However, the job is made easier by looking up into the canopies of the trees. To illustrate this point, I've take three photos looking up into the tree canopies of our Kanza block. In the top photo, you can see that branches of adjacent trees have started to touch. Trees in this area of the orchard will be thinned this winter. 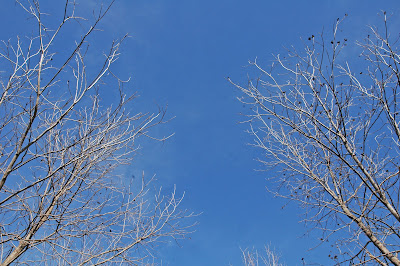 In this second photo the limbs are getting close but we can probably wait another year before thinning. This brings up a point. Portions of our Kanza orchard started to crowd long before other areas. Differences in tree growth rate across the orchard were a result of differences in soil conditions (better internal drainage=faster tree growth). I drew up a thinning plan for the entire orchard but we'll remove trees only in areas where the limbs are touching. 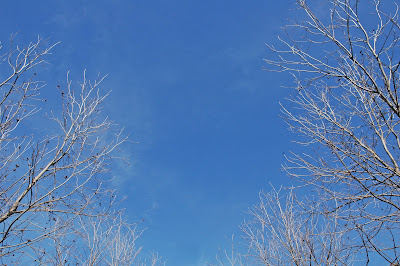 Ideally the limbs of adjacent trees should be about 10 feet apart. In this third photo, adjacent trees are well spaced and will not need thinning for several years.
Posted by William Reid at 8:48 AM