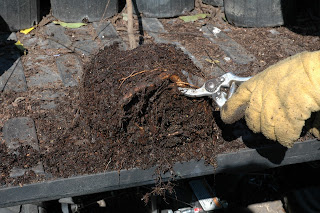 Planting container-grown pecan trees is becoming an increasingly popular method for establishing new pecan orchards. One of the advantages of using container-grown stock is that trees can be transplanted into the field in the spring or in the fall. In contrast, bare-root trees can only be planting in the early spring. 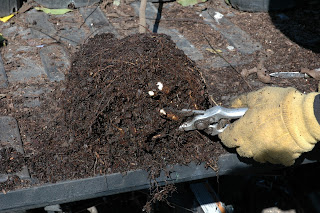 The tops of container- grown trees are usually tall and straight but inside the pot, tap roots become contorted and begin circling around the bottom (top photo). To prevent circling roots from girdling the tree in the future, prune the root system before placing the tree in the planting hole. I pull the circling roots down and away from the rest of the root system to find the point where the root is growing straight down. I then prune off the circling portion of the root. You might find 3 or 4 major roots winding around the bottom of the pot. Prune off all the curled roots (bottom photo).
Once all large circling roots are removed, the tree is ready for transplanting. When growth resumes in the field, most of the tree's energy will be concentrated on regrowing tap roots at the point of your root pruning cuts. The new tap roots will grow straight down, just like tap roots are designed to do. What we usually call transplant shock is actually just a period in the tree's life where root re-growth becomes the primary focus and new top growth is minimized.
Posted by William Reid at 3:09 PM

Holes in the bark 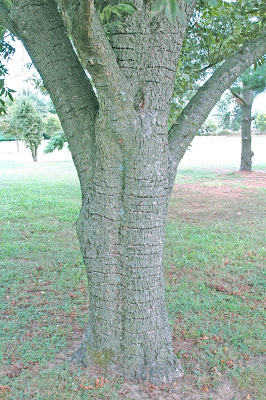 They seem to appear like alien crop circles in a British wheat field, mysteriously and overnight. Rows of holes drilled into the bark of your favorite nut tree. Some trees seem especially prone to this malady like this Stuart pecan tree (photo at left) growing near New Madrid, MO. The holes are typically conical in shape, wider near the surface of the bark and coming to a point at the bottom. Holes are drilled in near perfect rings around the trunk and large limbs. Many growers become alarmed when they see the holes and suspect an attack of wood boring insects. However, these holes are made by the yellow bellied sapsucker, a member of the woodpecker family (photo below).

Sapsuckers drill holes in the bark each spring to enable them to feed on tree sap that is flowing in the tree's trunk. Once these holes are opened, insects are also attracted to the tree's sweet sap and the sapsucker returns to the hole to feast on both insects and sap. Although the rings of holes look troublesome, sapsucker feeding does not affect nut production.  In the world of nut trees, I have seen sapsucker holes in pecan, hickory, black walnut, and Persian walnut.
Posted by William Reid at 11:30 AM

Graft when the tree is ready 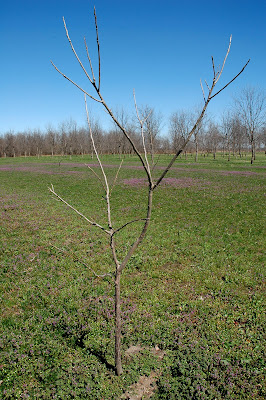 Increasing grafting success is as simple as being able to recognize when a tree is ready to be grafted. One of the most common mistakes made by pecan growers is to attempt the grafting process too soon after transplanting the rootstock tree. A pecan tree needs a well developed root system to push vigorous growth out of a newly grafted scion. Graft a tree too soon after transplanting and the scion either doesn't take or it grows very poorly.
The young tree pictured at right has had a hard life. We planted this block of trees during the fall of 2006 using container-grown seedlings. In the spring of 2007, all emerging  new growth was frozen off by the Easter freeze. Three weeks later the trees rebudded. In July of that same year, we had the second highest flood on record. The flood covered the trees, killing the foliage for a second time, and even caused some of the trees to float out of their planting holes. When the flood receded we replanted the floaters and hoped for the best. Miraculously, all but 5 of the 136 trees in this planting survived. In the end, the trees in this block needed an additional year to overcome transplanting and re-establish a strong root system.
It wasn't until the 2010 growing season that our seedling trees showed the sure sign that 2011 would be the year for grafting. New shoots grew over 2 feet in a single season. The tree pictured above actually had 2 flushes of new shoot growth in 2010, indicating that the roots were really ready to push new top growth. (Zoom in on the photo and you'll see that the second flush came from stalked buds)
You'll note that the form of this tree is far from perfect--branches growing every which way. Not to worry. In late April, I will be grafting this tree. I'll cut the tree off below all the branches and place a bark graft at that point. Once the bark graft starts growing, I'll prune the scion down to one bud and train that new shoot to the straightest most vigorous central leader tree imaginable. Grafting when a tree is ready not only increases grafting success but also makes training a young tree a whole lot easier.
Posted by William Reid at 4:46 PM

Email ThisBlogThis!Share to TwitterShare to FacebookShare to Pinterest
Labels: grafting 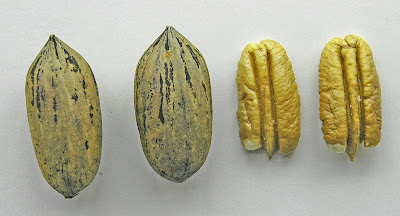 Back in the 1970's, Jerrell Shepherd had a vision to create a pecan orchard in mid-Missouri near Clifton Hill. The only problem was that his orchard would be on the extreme northern edge of the pecan tree's natural range. He soon discovered that cultivar selection, for pecans that would be adapted to his location, was very limited. Faced with limited choices, Jerrell set out across mid-Missouri on a quest to find  the best native pecans for propagation into his orchard. On a nearby farm, Jerrell was shown an exceptional native tree (nuts pictured above) that would later become known as the cultivar, Shepherd. (Jerrell actually purchased the tree in order to ensure a scionwood supply for his own trees.)
Today, Jerrell's son, Dan owns and operates the 200 acre Shepherd Farms pecan orchard that features Shepherd as one of  the major cultivars propagated on the farm. Dan likes the Shepherd pecan in his orchard because it yields consistently, has good scab resistance, and shells well in his Quantz cracker.
At our recent Kansas Nut Growers Meeting, Dr. Ken Hunt from the University of Missouri spoke on pecan cultivar performance at the Agroforestry Research Center near New Franklin, MO. In his trials, Shepherd  has turned out to be among the top five cultivars under test. Ken specifically pointed out that scab resistance was the leading reason he would propagate Shepherd.
Here's what we know about Shepherd from trials conducted at the Pecan Experiment Field.
Average Nut Wt. (2010):  6.39 g
Percent Kernel (2010):  53.01%
Flowering Type:   protandrous (type 1)
Average Ripening Date:   3 days before Colby (very early)
Precocity:   slow to bearing (similar to Major)
Cold Hardiness:   very hardy
Posted by William Reid at 3:59 PM 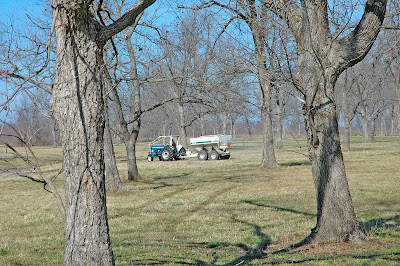 Today we are fertilizing our pecan groves (photo at right). For our spring time fertilizer,  we spread 150 lbs/acre of urea (69 lbs N/ acre) and 100 lbs/acre potash (60 lbs K/acre).
The cost of fertilizer has increased dramatically with the recent spike in energy costs. Today's fertilizer application cost $62.50 per acre, which represents the largest single-day expense we'll incur all season long. However,  fertilizer application is still the best investment you can make in managing your pecans. Annual fertilizer applications increase pecan yield by over 600 lbs/ acre.
Come this fall, we will apply and additional 100 lbs of urea per acre (46 lbs. N/acre) sometime during the month of October. If fertilizer prices remain constant (which they won't), the fall nitrogen application would add $22.25/acre to our fertilizer costs. For the year, we will end up applying 115 lbs. N/acre and 60 lbs. K/ acre. 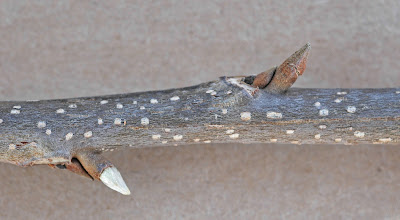 Over the years, I've been recommending March 1 as the date to fertilize pecans. But recently, I've realized that we should let the trees tell us when it is time to fertilize rather than the calender. The first outward sign that spring growth has begun is something called outer scale split. In the photo above,  you can see two primary buds. The right-hand bud is still covered by the outer scale but you can see a crack (or split) has developed in the protective outer layer. In contrast, the outer scale of the left-hand bud has cracked and fallen off, revealing silver-colored inner scales. Outer scale split is an indication that the sap is flowing, the buds are swelling, and the roots are growing. Applied nutrients are most efficiently taken up by pecan trees during periods of active root growth. Timing your spring fertilizer application by watching bud development is one way to optimize nutrient uptake and ensuring you are getter the most out of your fertilizer investment.
Posted by William Reid at 3:19 PM 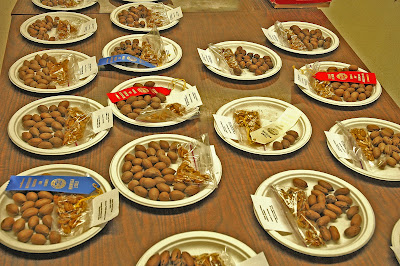 We had a great meeting of the Kansas Nut Growers Association last Saturday--lots of fun and a great time for fellowship. Featured at our annual meeting are exhibits of nuts grown by members of the association and by the Pecan Experiment Field. The 2010 crop proved to be a good one and we had some great pecan samples (photo above). I always enjoy watching nut growers inspect the samples. They pick up a nut to get a feel for its weight and then take a closer look at the details of nut shape and outside shell markings. Kernel quality is especially important to our growers. Bright-colored, plump kernels are preferred by both grower and consumer. You'll note we place the shelled-out kernels in plastic bags to deter taste testing so everyone can get a chance to inspect kernel quality. 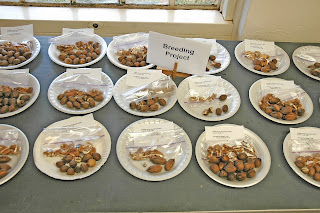 The growers were excited to see nut samples from our pecan breeding project (photo at right). This is the 1st year some of the trees in our breeding block have produced nuts. As you might have expected, I was given dozens of opinions on which clone should be propagated. But there is one thing I've learned during 30 years of pecan cultivar testing--it's impossible to judge a pecan clone based on a single year's nut crop. The 2011 crop should give us even more clones to evaluate and an opportunity to see a second crop from the trees that produced in 2010.
Posted by William Reid at 1:35 PM

We spent most of today cutting Lakota pecan scionwood. With a quick slice of the knife we found that Lakota did not exhibit the the same kind of internal browning we saw on our Pawnee wood (see previous post). I was kind of surprised by this because both Pawnee and Lakota represent hybrids of southern and northern cultivars. Pawnee is the results of Mohawk X  Starking Hardy Giant cross, while Lakota is a Mahan X Major cross. Could it be that having a female parent of Major make a clone more cold hardy? Remember that Kanza is a Shoshoni X Major cross and we've seen only green healthy bark this year on our Kanza scions. 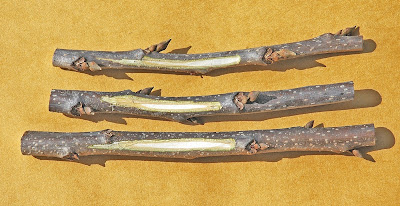 We cut into some Pawnee twigs yesterday and discovered that the cold snap we experienced back in February (-16 F) has caused some internal browning (photo above). The damage looks like it should not prevent normal bud break and shoot growth but it will be interesting to see if pistillate flower formation is affected by the freeze damage.
Over the coming weeks we will be evaluating all of our pecan cultivars for cold injury. Then, later in the season, we'll see how the cold injury affect bud break and flowering.
Posted by William Reid at 2:59 PM