This year I'll be making a photographic record of pecan shuck-split just as I have every fall since starting this blog. However, this year, the photos will be limited to the cultivars I have bearing on my farm. The first grafted cultivar to split shuck was a USDA clone numbered 61-1-X. This clone was the result crossing Barton with Staking Hardy Giant way back in 1961.
Today, I found that Faith and Gardner had split open. These two cultivars are very similar to Pawnee in terms of ripening date, nut size, and nut appearance. So, if I had any Pawnee on my farm (I don't), I'd expect it would be shuck-split also.
Over the past couple of weeks I've been collecting nut samples from trees in my breeding block. As each tree ripens their nuts, I collect a sample and record the shuck split date. So far this year, two trees ripened on Sept. 17, two ripened on Sept. 20 and 14 ripened ripened on Sept. 24. Among the trees that ripen before Pawnee several look promising. 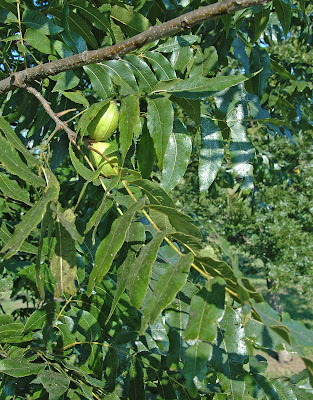 After a week of above average temperatures, our pecan trees seem to be infested with aphids and covered in honeydew (photo at right). Every surface of every leaf is sticky with honeydew and numerous flies and wasps are busy collecting the sugary substance.
We seem to get a late season aphid outbreak almost every year and I usually recommend not trying to control these insects because the cure often increases the problem in the long run. 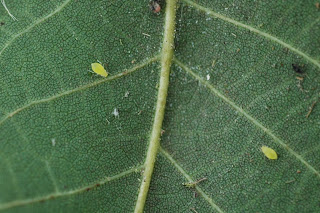 One interesting observation I've made about aphids this year is how weather conditions can influence their populations. Back on August 13th I photographed the first aphids I found (photo at left). At that time, the population of black-margined pecan aphids had reached high enough numbers where you could easily spot drops of honey dew on the leaves. But then the weather changed and we received more than 7 inches of rain over a 5 day period. Both the honeydew and most of the aphids disappeared, washed from the leaves by the heavy rain. 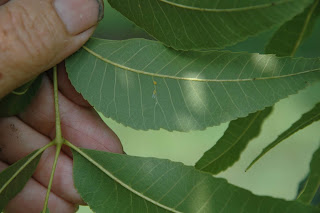 The weather dried out over the next week and I noticed just a few aphids on the underside of  the leaves of my pecan trees (photo at right).  But then the clouds rolled in again and dumped enough rain to cause localized flooding. The heavy rain was again enough to knock down the aphid population. 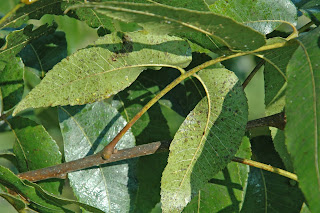 Over the past two weeks, the weather has been dry and unseasonably hot. And now we have an explosion in aphid populations (photo at left). Every leaflet seems to have at least a dozen aphids feeding on the sap of the pecan tree.
A large aphid population usually crashes on its own but the rain predicted for this weekend may serve to hasten the crash.
I certainly hope we get enough rain to wash the foliage clean of honeydew and aphids. Lately, I've been getting covered in honeydew as I collect nut samples from the pecan breeding project. Its driving me crazy to get sticky plant sap stuck in my hair.

Email ThisBlogThis!Share to TwitterShare to FacebookShare to Pinterest
Labels: aphids 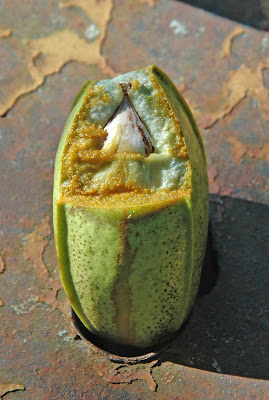 The official first day of Fall is just around the corner so, today, I thought it would be a good idea to check on the progress of pecan shuck-split among the trees in our breeding program. To find out if the shuck is beginning to separate from the shell of a pecan, I use my pocket knife to slice down through the shuck until I hit shell. I give the knife a quick twist to see if I can easily pop off a portion of the shuck. Separation between shuck and shell begins at the apex of the nut and works downwards toward the base. So my first cut is always about 1/4 of the way down the nut. If the shuck pops off, I make a second cut about 1/2 the way down the nut. In the photo at right, you can see that the shuck separated from the shell at the 1/4 cut line. Note the beginnings of the shell markings near the tip of the nut. Then with my next cut the shuck stayed firmly attached to the shell. This pecan was only starting the journey towards shuck split. 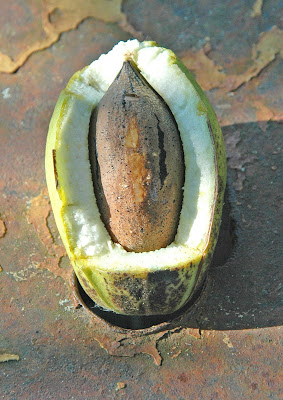 Moving on to another tree, I found pecans that were further along in the shuck-split process.  I used the same process of cutting through the shuck 1/4 of the way down the nut then repeating at 1/2 and 3/4 of the way down. The photo at left shows a nut after I made the 3/4 cut. Here I found that the shuck was completely separated from the shell but the shuck had not yet split open. I then decided to peel off all the shuck to take a good look at the nut within. 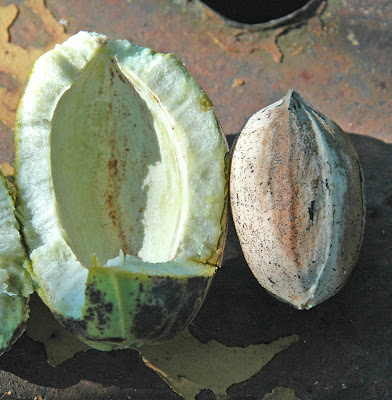 The nut was easily extracted from the shuck but had yet to develop the even brown shell color we usually associate with mature pecans (photo at right). To develop normal shell color, the nut needs to be exposed to the air and begin the drying process. This will start when the shucks split open. 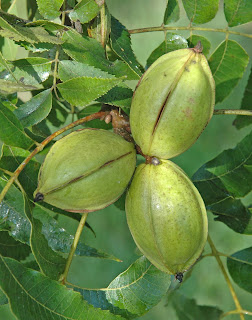 The splitting open of shucks is another process that occurs over time. Each pecan cultivar seems to split shuck just a little differently. In the photo at right, the shuck has begun to open along the suture right in the middle of the nut. 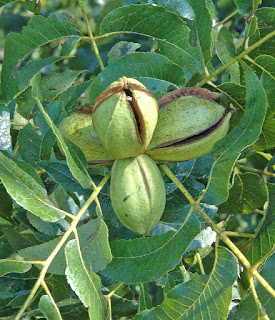 In the more common case, the shuck opens at the tip of the nut and works towards the base (photo at right). The nuts pictured here are from our earliest ripening clone. Last year I recorded shuck-split for this tree on Sept. 20. This photo was taken today (17 Sept. 2018). 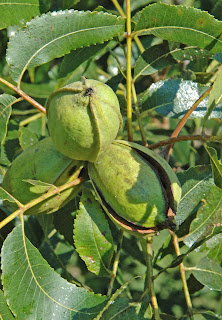 One other observation I have made when recording shuck-split data. With many cultivars, shucks open uniformly over the entire tree. While other trees seem ripen over a couple of weeks. The nut cluster pictured at left shows a pecan clone that splits shuck one nut at a time over a  7-10 day period. In a cluster of 3 nuts, one is fully open while the others are still held firmly inside the shuck. Looking over the entire tree, I noticed just a few open shucks randomly within the canopy. Most nut were still tight in the shuck. 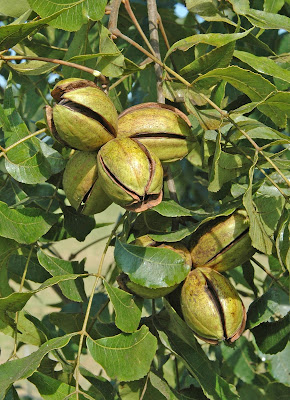 Over the next month, I'll be watching for shuck-split among tree in the breeding project and the trees I've grafted on the farm. As of today, I found no movement towards shuck-split on my Kanza, Hark, Gardner, and Faith trees. (Gardner and Faith ripen the same time as Pawnee).
The photo at right is from another tree in the breeding project. This nut may be early ripening but it is not a very impressive pecan.

This fall I'm taking the time to closely compare the performance of Hark to Kanza. As readers of this blog know, Kanza is my favorite pecan cultivar because it produces high quality kernels, is scab resistant, and produces good pecan crops annually. Hark is a relatively new cultivar that has shown great promise. In comparison to Kanza, Hark has similar nut size, kernel quality, ripening date, and scab resistance. The importance of Hark is that it is protandrous and would be a prefect pollen partner for Kanza, a protogynous cultivar.   However, being a new cultivar, Hark does not have a long track record of performance. How will a 40-year-old Hark tree perform? It will be decades before we find out.


Today, I stopped by my Kanza and Hark trees to check on their kernel development. Seeing a good crop of pecans on both cultivars gets me excited for the coming harvest season. 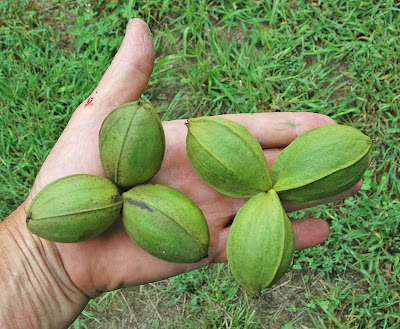 I pulled a cluster of Kanza nuts off a tree then collected a similar cluster from a Hark tree. Holding both clusters in my hand (Kanza on left, Hark on right), I photographed the nuts  to give you a good idea about the size of these nuts. In the photo above, it looks like Hark is a little larger than Kanza. 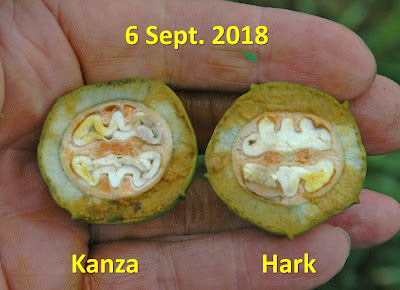 I cut a nut from each cultivar to check on nut development (photo above). The shells inside reveal that the nuts are very close in size. But note the thicker shuck on Hark. This is why Hark looks bigger than Kanza while still green and hanging on the tree. I also noted that Kanza is a little behind Hark terms of kernel filling. However, with all the moisture we've received the past few weeks, both cultivars should have no problem packing the inside of the shell with kernel.

Pecan seedling or grafted tree: How to tell the difference 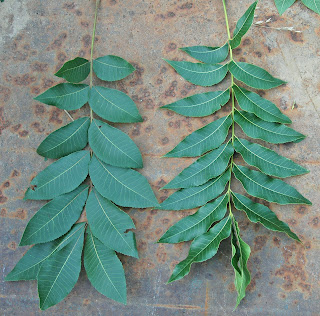 Several weeks ago I received and email from a grower that had was having trouble determining if the shoots growing from a newly planted tree were coming from the scion cultivar or from the seedling rootstock. Once you learn what to look for, telling the difference can be easy.
In the photo at right, the leaf on the left was produced by a trunk sprout originating from below the graft union. The leaf on the right came from the grafted portion of the tree.
Early in the growing season, juvenile leaves have a reddish appearance compared to the bright green of leaves growing from mature wood (the scion). But by mid summer the color differences are more muted.
Look at the color of the rachis of each leaf (the rachis is the stem-like structure to which the leaflets are attached). By mid-summer, the red coloration of the rachis of the juvenile leaf (at left in photo) has faded and is now dull greyish-green. In contrast, the mature (grafted) leaf has a rachis that is bright green in color. 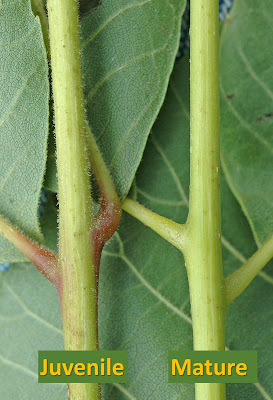 Taking a closer look at these two leaves reveals stronger differences between juvenile and mature leaves. I flipped the leaves over and took a close-up photo of the rachii of these two leaf types (photo at left). Note that red pigmentation can still be seen on the juvenile leaf, especially at the point where the leaflet attaches to the rachis. The mature leaf has no red coloration.
Now, look closely at the surface of the juvenile rachis. Note the small hairs that cover the rachis and the petioles of the leaflets. To the touch, these plant parts feel rough especially when compared the the smooth rachis of the mature leave.
Many pecan growing novices end up caring for a pecan tree for 20 years and never see a pecan crop.  They most likely ended up with a seedling tree because the graft died sometime after planting and then sprouted from the rootstock. To avoid wasting 20 years waiting for a seedling tree to produce, learn to recognize juvenile leaves, then brush up on your grafting skills to topwork any seedlings while they are still small enough to graft.