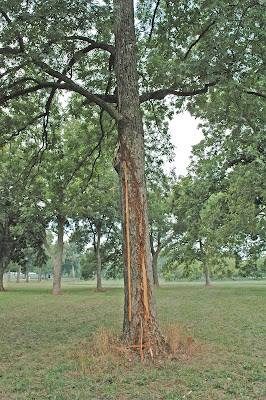 Over the past week, thunderstorms have passed through our area and brought much welcomed rain. However, these storms also contained powerful lightning and one of our native pecan trees received a direct hit (photo at right). The electrical charge that hit this tree exploded the bark off the tree in two long stripes. Bark and wood splinters where thrown over a hundred feet from the trunk.
Large pecan trees are hit by lightning because the tree's sap acts as a better conductor of electricity than air. As the electrical charge passes through the tree, it heats the  sap so fast it boils with explosive energy. It is this rapidly expanding water vapor that actually explodes wood and bark from the tree. 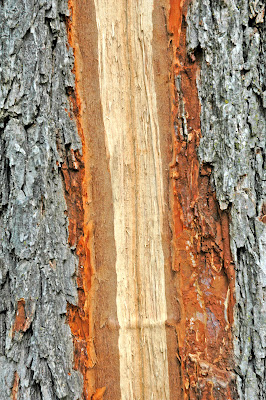 A close up look at the damage reveals the relatively narrow path of the electrical charge. In the photo at left, note the dark line near the center of the exposed wood. This the actual path of the lightning strike. All of the rest of the damage to wood and bark was created by the  explosion of water vapor.
The question now becomes, "will this tree survive?".  Most healthy pecan trees, including this one, will eventually heal over the wound created by a lightning strike. In fact, a quick walk through almost any native pecan grove will reveal several trees with old lightning injuries callused over but still very visible.
Posted by William Reid at 9:24 PM