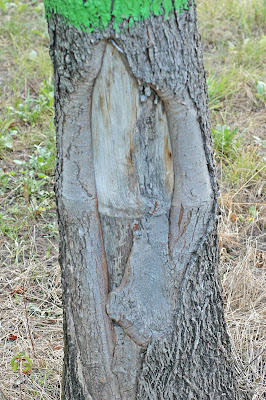 Back in 2007 we had an ice storm that caused a lot of damage to our pecan grove. In one of our cultivar trials, I found a tree that had suffered massive trunk injury caused by an adjacent tree falling completely over during that storm. Six years later that tree is still trying to heal over the wound (photo at right).
Interestingly, this tree wound has revealed the wood growth patterns of the tree's graft union. In a previous post, I have shown you what a graft union looks like from the inside (a cross section through the wood). With the bark removed from one side of this tree, we can now see the wood of a graft union from the outside. Note the raised ridge of wood that runs horizontally across the trunk. The color of the exposed and weathered wood is lighter above the graft than below. 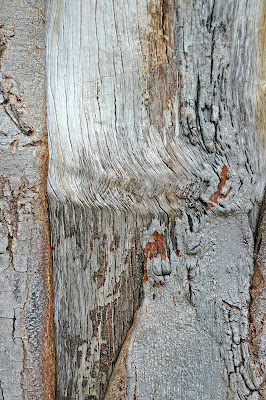 The photo at left is a close up of the graft union. The grain of the wood has a distinctive swirl at the point where the scion meets the stock. I've see this swirl pattern in other grafted trees including apple and peach trees.  Why the swirl? I guess I could make up some fancy explanation, but this time I think it best just to sit back and enjoy looking at one the of nature's miracles.
Posted by William Reid at 4:30 PM