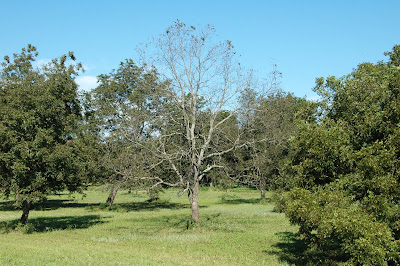 While driving into Chetopa, I've noticed a native pecan tree that has already shed most of its leaves (photo at right). I stopped the truck and walked down into the grove to investigate. Turns out, this native tree was especially susceptible to pecan anthracnose and the disease has prematurely defoliated the tree.
The combination of a wet summer and no fungicide applications has allowed pecan diseases to run wild in many native pecan groves this summer. I spent some time today taking some photos of some common pecan diseases. 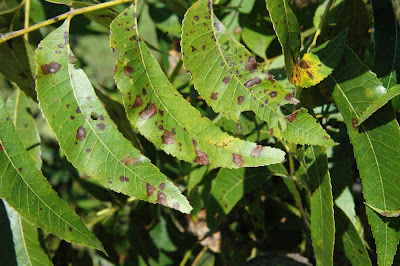 First up is Brown Spot (photo at left) caused by the fungus Sirosporium diffusum. This is a fairly common late season leaf disease during years of high late summer rainfall. I have only seen this disease in orchards that do not receive regular fungicide applications during the growing season. 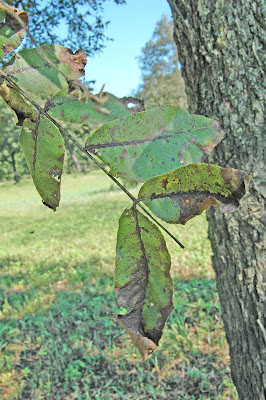 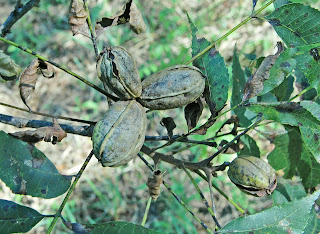 Pecan anthracnose infected nuts are often confused with pecan scab infects nuts. Nuts infected by anthracnose in mid-summer will turn dark brown, stay small in size and often partially split shuck (photo at left). However, the shucks on the small nut pictured at left with never release from the shell. Nuts infected later in the summer will gain full size but the brown shuck will be slow to open in the fall. 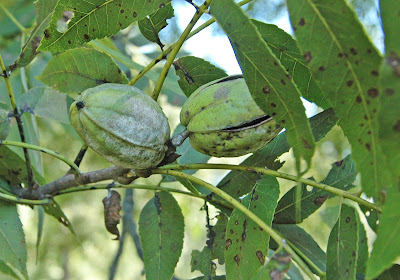 I also found Powdery Mildew on some nuts. The fungus, Microsphaera penicillata, causes a white powdery substance to form on the surface of pecan shucks. The disease seems to have little impact on nut fill or shuck opening. 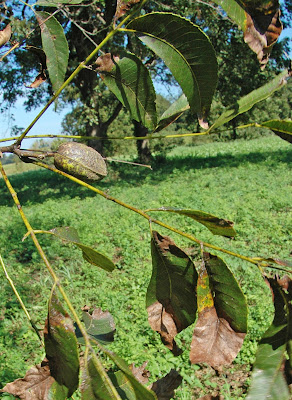 I started this discussion on pecan diseases all because I saw a native tree completely defoliated by the middle of September. The photo at left shows a pecan terminal that has already lost a significant number of leaflets due to anthracnose. As leaves loose their ability to photosynthesize due to disease infection, the tree sheds the damaged foliage. If disease induced defoliation is severe enough, the tree will simply shut down for the season and go into early dormancy. Trees suffering from early defoliation produce few or no nuts the following growing season.