A split pecan shell can be a sign of trouble inside 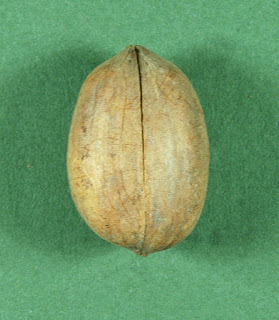 Over the past week, I've been staring at thousands of pecans moving down the pecan cleaner belt. Cleaning the crop may be monotonous but it all part of the fun of pecan growing. While cleaning pecans, I always look out for anything that's unusual. I'll pull off a nut that sparks my interest and set it aside for closer inspection later. This year, I noticed several pecans that have split shells (photo at right).  There can be several causes for the shell to split open along the suture; sometimes the reason is obvious, other times you will need to open the nut to pinpoint the cause. 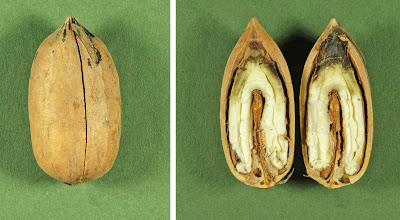 The split pecan pictured above is an example of a nut that started to sprout (form a root) while still on the tree. This condition is known as Vivipary. When this nut crossed the cleaning table, I could see the dark, dried up root sticking out of the nut's apex. Using my knife, I split the nut completely open to reveal what premature nut sprouting does to kernel quality. The blackening of the kernel would make this nut completely unsaleable. 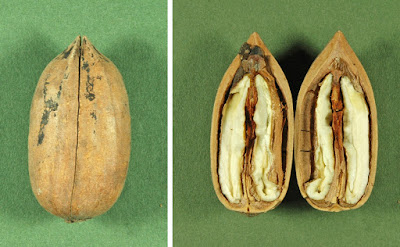 The nut pictured above is a not-so-obvious example of vivipary. In the split, near the apex, I noticed a very small piece of dark tissue. When I split the nut wide open, I found that this nut had only just started to sprout. It is most likely that the root tissue of this nut and the root of the previous example of vivipary were killed by the extreme cold temperatures we experienced in early November (14 degrees F). 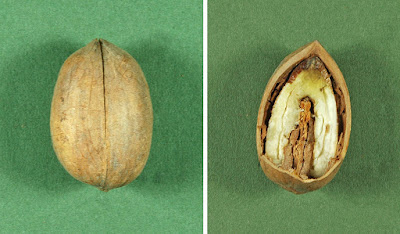 Some pecan cultivars have genetically weak sutures and are to prone to splitting open as the kernel fills the inside of the shell. The pecan pictured above is an example of  a weak suture that allowed fungi to colonize kernel tissue. This is especially a problem during wet fall weather when pecans sit on the ground for weeks before they can be harvested. 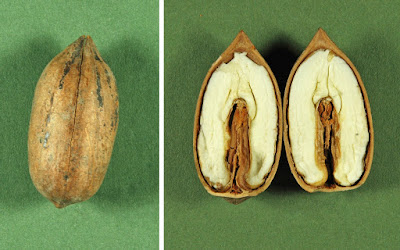 The final example of a split shell reveals that not all pecans with split shells turn out to have defective kernels. Now that this nut is harvested and held in a cool and dry place, I wouldn't expect the nut to become infected with kernel rotting fungi. But, if this nut was still sitting outside under a pecan tree, the split shell would make this pecan prone to picking up a kernel rot.
Posted by William Reid at 9:29 PM