Top-working a pecan: Reasons for failure and an appoach for next spring 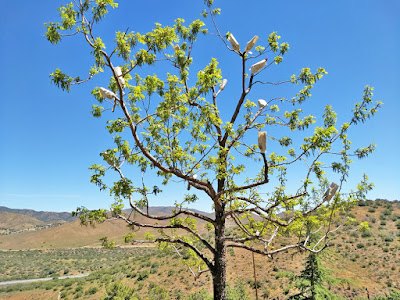 Recently a California pecan enthusiast sent me a photo of his failed attempt at top-work a fairly large pecan tree (photo above). He had found my pecan blog online and solicited my advice on how I would approach grafting his tree. Rather than just replying to his email, I though his photo could prove to be a good learning opportunity for many of my readers.
I'll start by pointing out why I think things went wrong. From what I can see, 9 grafts were attached to this tree, each covered in a paper bag, and scattered among terminal branches. From the photo, I cannot tell which grafting technique he employed but I do know that every graft failed. The biggest mistake made in grafting this tree was that not enough of the tree was cut back to force a graft to take. Applying a graft out on the end of a branch simply allows too many places for the tree to grow around the cuts made in grafting. Ultimately, the tree just walls off the scion like it was a broken twig. In addition, I am not a fan of placing a brown paper bag over the graft union and scion. Rather than shading the graft as intended by this method, the bag can cause the scion to get too hot, baking in the every present Southern California Sunshine. Thirty years ago, I visited a commercial nursery that was bagging every pecan graft. I recommended dropping the bagging process and their grafting success increased dramatically. 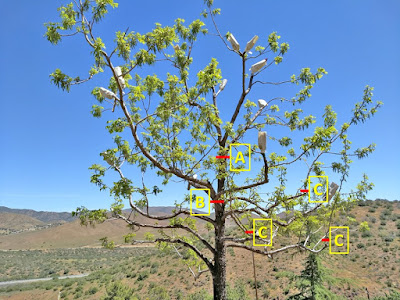 Now lets look how I would approach grafting this tree next spring. Before making a single pruning cut, I would make sure to obtain some good scionwood cut from a vigorous one-year-old shoot. I would top-work this tree with a single bark graft, so great scionwood is critical. When leaves start to unfurl next spring, this tree will be ready for grafting. In the photo above, I have drawn in the pruning cuts I would make. The cut labeled "A" is the location where I would place a bark graft (directions for bark grafting can be found Here). I would also remove the large 3-forked branch marked "B" to make sure all of the tree's upward growing energy is directed to the graft union. I would leave all the remaining lower lateral limbs in place to shade the trunk and provide valuable leaf area to help feed the root system. In addition, I would also do a little detailed pruning by removing any small branches that are growing strongly upwards (cuts marked "C"). In fact, all summer long I would return to this tree to make sure that the lower lateral limbs only grow outwards not upwards.
After inserting a bark graft into the top of the central leader, I would be certain to attach a 8-foot-long training post to the trunk so that it extends 5 feet above the scion. My goal for this tree would be to get 5 to 7 feet of new growth from the scion during the first summer so I'll need a good sized training stick to support the scion and prevent wind damage.
Posted by William Reid at 8:46 PM