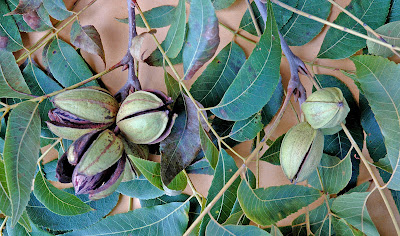 This morning I cut nut clusters from two trees (photo above). Both clusters were cut from 'Faith' pecan trees, and both were taken from trees that have grown to about 5 inches in trunk diameter. The cluster on the left has been shuck split for quite some time and the nuts have decent size. In contrast, the cluster on the right is only now starting to split open and the nuts are tiny, about the size of a small native pecan. What caused this difference in tree performance? Location, location, location.
The cluster on the left was collected from a tree growing in the Neosho River flood plain growing in Osage silty clay soil. The cluster on the right was collected from a tree growing in Cherokee silt loam soil which is a "second bottom" soil found adjacent to the Neosho River flood plain.
Small nut size and a delay in maturity is caused by an extreme shortage of water.  Both Osage and Cherokee soils are deep, heavy, and poorly drained. Although Cherokee silt loam has a somewhat lighter texture than Osage silty clay and primary difference between these two soil types in terms of pecan performance in 2012 was position in the landscape. When the Neosho River runs over its banks Osage soils are flooded. Cherokee soils haven't been under water since the melting of the glaciers at the end of the last ice age.
This past spring we had a flood on the Neosho River which covered all the pecan groves growing in Osage soil. That flood recharged the subsoil moisture lost during the 2011 drought and provided valuable moisture for the 2012 crop. The tree growing in the upland position (Cherokee soil) was not flooded and did not receive enough rainfall during the season to recharge the soil's moisture reserves. As a consequence the tree growing on the upland suffered greatly during our second dry summer in a row.
When it comes to pecan tree performance,  the importance of good site selection can never be over-emphasized.
Posted by William Reid at 5:10 PM