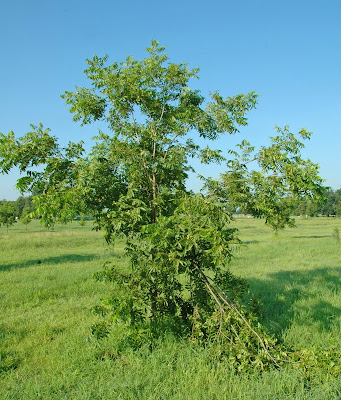 After a weekend of thunderstorms and heavy rain, I drove down into my pecan grove to check on my trees. This year my trees are so weighed down with nuts that high winds can cause serious limb breakage. It didn't take too long before I spotted the tree pictured at right. At first glance, it looked like the central leader of this tree just snapped. 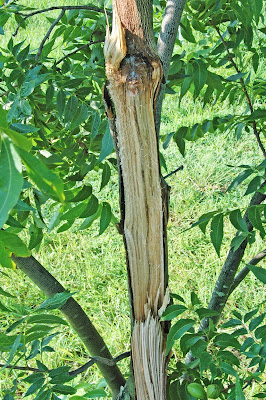 On closer inspection, I learned that the tree actually split at a narrow branch crotch that had a well defined bark inclusion (photo at left). Once the two branches of the narrow crotch started to split the entire trunk split just like a piece of firewood. 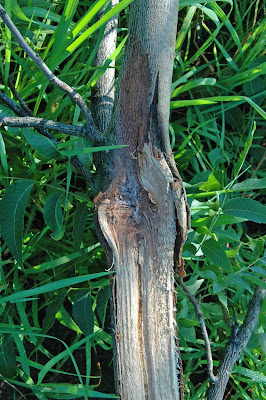 I cut off the fallen portion of the tree and was able to get a close up view if the bark inclusion (photo at right). Notice that above the inclusion the bark of this fallen branch has a long rub mark (brown patch on the grey bark). The two limbs that made up this narrow crotch had been rubbing against each other every time the wind blew and forcing open the bark inclusion. It was only a matter of time before one or both would give way.
I left the remaining damaged but upright branch in place. This weakened branch may break in the next storm but for now I'll leave it in place to see if it can heal over such a large wound. 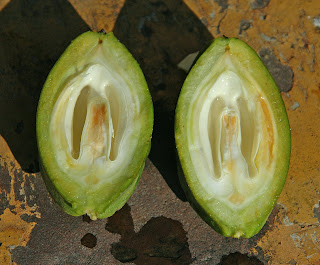 I pulled off a nut from the fallen limb and cut it open (photo at left). This Kanza nut was in full water stage; the perfect time to shake a tree to reduce a heavy crop load. This broken limb made me go back and look at all my Kanza trees more closely.  After careful consideration, I decided to get my trunk shaker ready. (see summer shaking post)
Posted by William Reid at 9:45 PM