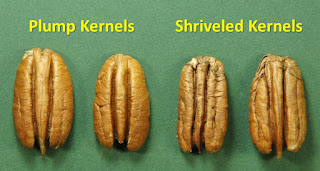 Lakota is a scab resistant pecan cultivar that performs well in S.E. Kansas but it has one fault that must be carefully monitored. Lakota will over-produce and slip into severe alternate bearing. To alleviate the problems associated with excessive nut set, I used my trunk shaker in mid-summer to remove a portion of the crop.
Recently, I pulled a sample from my 2019 Lakota crop to check on nut quality and determine if I had shaken off enough nuts back in August. I found that 90+% of the kernels appeared plump and fully formed (photo above). However, a few kernels demonstrated the negative effects of a tree carrying a heavy crop (shriveled kernels). During the summer of 2019, we had ample rainfall so I knew that any kernel shriveling would be due to a excessive crop load and not be drought related.

To check on kernel quality, I broke several kernels in half so I could see how well the kernel tissues were packed inside of each nut (photo above). Kernels that appeared plump from the outside had some small air pockets in the center of each kernel half indicating a not-so-perfect fill. Shriveled nut meats had thinner layers of kernel tissue and they had very pronounced air pockets. Several kernels developed hollow backs. These nuts appear plump on the top side of the kernel but the underside is sunken or hollow. The hollow back kernel has a well developed layer of kernel on the top but little or no kernel layer adjacent to the inner wall partition.
After looking over dozens of nut samples from my 2019 Lakota crop, I concluded that summer shaking did improve my kernel quality but I should have shook even more nuts off each tree to achieve top kernel quality. Each year is a learning process when it come to crop load regulation, so hopefully, I'll do better in the future.
Posted by William Reid at 10:21 AM